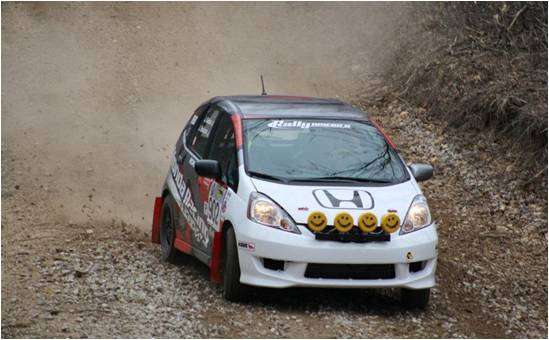 One would think that the rather demure 2012 Honda Fit EV would be a miss-match for competition in North America’s oldest hill climb competition; Not so. Honda R&D and HPD return this year to the 92nd running of the Broadmoor Pikes Peak IHC with a mildly modified Fit EV and a race prepared Fit B-Spec Ralley Car.

While we don’t expect either Honda to take 1rst place overall honors in the hill climb, we won’t be surprised to see the Fit EV and B-Spec racer make a good show of it. After all, B-Spec domonated 100 Acre Woods in 2014.

Production Electric: Roy Richards of Boron Ca. will be running a mostly stock 2012 Honda Fit EV up against Steve Wickham of Huntsville in his Toyota Rav4 EV. With only two racers running in this bracket the time to beat is 14:33.329, 82.4 km/h; set in 2011 by Chad Hord driving a Nissan Leaf. EV enthusiasts will be watching.

Exhibition Division: Corie Taguchi of Simi Valley Ca. will be piloting a HPD prepared 2010 Fit B-Spec to the top of the hill in the Pikes Peak Challenge-Exhibition Division.This segment is for race modified stock cars. We’re big fans of the Fit B- Spec SCCA club racer and have covered the car here.

Looking to the Exhibition Division we find 4 entrants. However, look for close competition in this class as our Honda Fit comes ups against BMW(M3,) Ford and Radical.

Big Show: Honda is hitting the hill this year with an unprecedented factory sponsored effort. Running everything from a Honda 250 cc single motorcycle to powering the i-VTEC 3.5 Liter twin Turbo V6 Norma M20 RD Limited for Romain Dumas. We find nine entrants in the Unlimited Division.

“Unlimited” is where we hit record speeds. Mechanically, anything goes. look for Team Mitsubishi and Nobuhiro”Monster” Tajima to take EV performance racing to new heights with the all electric E - Runner Pikes Peak special.

James Robinson of Delaware,OH. is running a 1991 Honda (Acura) NSX in Pikes Peak Open. We have no idea what HPD has done under the hood of the vintage NSX. The record is held in this division by last years overall runner up Romain Dumas in a Porsche GT 3R. Time to beat here is 9:46.181 and 122.8 km/h.We wish James a great run.