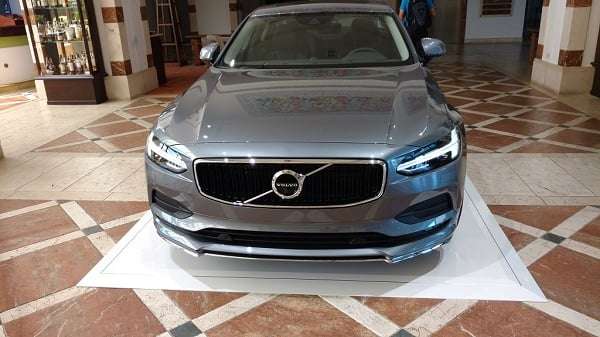 Volvo elevates 4 cylinder gasoline turbo power into the luxury confines of the largest and most drive-dynamic sedan in the maker's history. 2017 Volvo S90 T6 is a bit of a mind blower!
Advertisement

Presenting the most technically advanced, standard safety feature, drive-dynamic sedan in Volvo’s history, 2017 Volvo S90 AWD Inscription’s body line not only captures the imagination, but hints to the joy of things to come. It’s absolutely visually and sensory perception stunning, yet there’s much more to the S90 story than initially meets the eye.

Volvo S90 T6 features one of if not the most refined and powerful 2.0 Liter 4 cylinder gasoline engines available in the premium midsize segment -- while achieving exceptional non hybrid fuel efficiency. Volvo is betting that you won’t miss your 6 or 8 cylinder engine, after experiencing the S90, I agree. On returning from an initial presentation and drive reveal of Volvo’s latest sedan incarnation on the roads of Spain, I pondered the implications of the maker’s current unbridled market assault on Acura, Audi, BMW, Lexus, Mercedes, Cadillac and other domestic makers, while vying for dominant sales position in North America’s midsize premium sedan segment. Here's my slant on a near identical in size and base horsepower competitor.

According to Volvo: 150,000 premium sedan leases expire in 2016, and the Swedish based manufacturer wants an expanded piece of the action -- in rolls the 2017 S90 sedan.

Huge by European sedan standards, 2017 Volvo S90 shares XC90 build architecture, and by model year 2018 will be electrified, most likely co generated, plug in and eventually, (Volvo tells us within the next decade,) stand alone electric and autonomous driving. Read my complete first impression drive review of the segment setting Volvo S90 here.