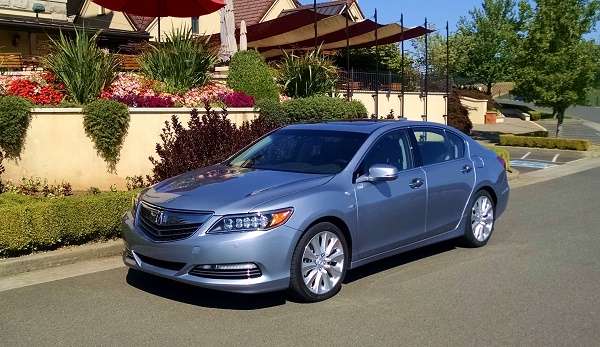 With 14,000 miles driven in the seat of new Honda and Acura Division cars for 2015, narrowing our choice down to one Honda Motor Company offering was a difficult if not impossible task.
Advertisement

So, we looked to perhaps the most unique driving experience in the Honda, Acura stable. Admittedly just a bit Acura RLX obsessed, I’ve penned well over a dozen articles on Acura’s rarest, and most expensive offering, the 2016 Acura RLX Sport Hybrid SH-AWD with Advance.

After waiting less than patiently for well over a year,(thank you Jessica and and Allie) on its extended arrival from Japan (RLX is Acura’s sole import offering) Acura kindly facilitated a week-long drive review in the only 2016 RLX Sport Hybrid in Acura’s Pacific Northwest press fleet.

With less than 500 miles recorded on the odometer, one of the rarest production cars in the U.S. was gingerly deposited in our driveway.

It’s difficult to put into words the experience of piloting 2016 Acura RLX. We were afforded the opportunity to drive both the FWD RLX with Advance, and the rarer than finding a flawless 3-carat diamond under your living room couch cushion 2016 RLX Sport Hybrid with Advance.
Note: 2195 RL/RLX of all variants sold in North America for 2015.

It’s the delivery and control of the combined torque that surprises here, transferred to the road via an electronically shifted dual clutch 7-speed automatic transmission. You may view full RLX specifications here.

Both RLX variants afford the driver and up to 4 passengers exceptional engine performance, drive stability, reasonable road handling and arguably the most advanced active safety features available on four wheels today. The leg and headroom in RLX is exceptional, the rear seat exceedingly comfortable, and limousine roomy.

At times the interior cabin quiet is just a bit eerie, the seats infinitely adjustable, heated, cooled and bordering on fall-to-sleep comfortable. Yet, when the need or want arises to drive aggressively, as we experienced in San Francisco traffic, RLX in either variant, readily answers the command to accelerate with neck snapping, Chiropractic visit inducing urgency. It’s full sized, agile and bad-ass, in a good way.

Prospectively, unless set side by side with its agile, smaller stable mate 2016 TLX, RLX while substantial, is not overbearing. And for many onlookers, may not possess the same visual punch or assumed social status as an Audi-6, BMW 7-Series or Mercedes Benz S-Series. Yet when tested under real world driving conditions, actuality surpasses certain drive performance and active safety features of the aforementioned herd, and does so for well under MSRP $70,000 U.S. fully loaded., a relative bargain in its segment.

When one drops into the drive and ride environment that is 2016 Acura RLX, a sensory hit of fine grain leathers, melded with that new car smell, mix with a visual panorama of wood grained-like finishes and brushed metals, as quality soft and hard surfaces greets well placed twin glass-dash center stacked mechanical and electronic par-excellence. 2016 Acura RLX announces that one has arrived, ‘made it’ if you will, without false pretense. No excuses, justifications or refinance of the house required to own one. This is Honda, Acura engineering at its pinnacle, a relative bargain in the world of full size luxury cars.

On a personal side note, I truly appreciate the RLX night-drive experience, wide field of vision Jewel Eye ™ L.E.D. headlamps, digital tail and courtesy lighting accents, spot on fade-free braking, SH-AWD enabled track-like stability, and decent steering wheel to road feel. I found the the cabin to road visibility to be largely unobstructed and exceptional.

Note: We’d have to dedicate an entire article to the premium Krell Stereo, active safety features, personal convenience features and systems presented by our RLX test mule. However, you may catch a bit of that review here. As with all Acura vehicles reviewed by Torque News, the only feature of RLX that we found to be a bit perplexing was the voice command recognition. She doesn’t like me! I’ll leave it at that.

Precision crafted coachman ship and hybrid performance is the mission here. Acura achieves it in spades through one of the most unique and fun to drive full size sedans on the market today. looking to the Acura primary I.C. engine, multiple motor electrification of RLX, on some level, one is looking to the future of personal conveyance.