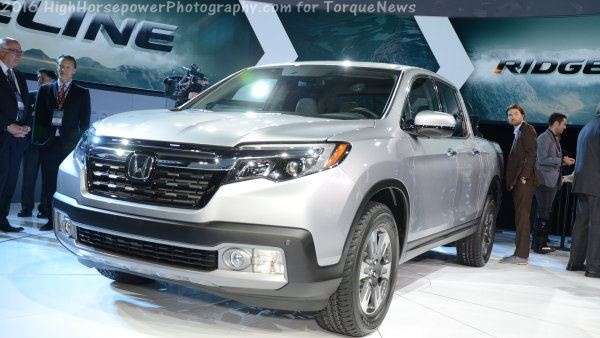 Is 2017 Honda Ridgeline enough truck for you? [Photo update from Detroit]

Is 2017 Ridgeline enough truck for you? Torque News Managing Editor Patrick Rall provides us with a photo update from Detroit.
Advertisement

Granted, with trucks like the Ford F150 SuperCrew Raptor populating the floor of the Detroit NAIAS, outside of Honda fans, Ridgeline may not make a dent in North American Pickup Truck sales. That doesn’t keep me from wanting one.

2017 Honda Ridgeline in not a full size truck in the conventional sense, doesn't come to market with a high output turbo diesel option, tow 8,000 lbs, nor does it take up two parking spaces at your local grocery outlet.

Ridgeline pushes the size limitations of the midsize pickup segment, and is ideal for buyers wishing to have access to truck-like utility without the bulk of full size offerings.

Midsize ease of parking and maneuverability .
Reality Check! 2016 Honda Ridgeline in any variant is not positioned to dethrone Chevy Silverado, Ford F150 or Dodge Ram, it doesn't have to.

When 2016 Ridgeline comes to market mid-year 2016, there will be no other truck like Ridgeline on the market. Honda tells us: “Make no mistake about it, Ridgeline is truck-tough”

I’ve reported on first generation Ridgeline in length as to versatility, ride comfort, unique looks and foul weather superiority, based on my own and other Ridgeline owner’s drive and ride experience.

The first time I experienced Ridgeline in the dirt was back in 2005, off-road in Northern California’s Southern Humboldt County’s mostly goat trail rugged outback.

At that time, I was the proud owner of a 2500 series turbo diesel powered Dodge 4x4 pickup, and was just a bit blown away by the smooth off-road ride experienced behind the wheel of Honda’s unibody, independent suspensioned Ridgeline, and tow capability.

Although Ridgeline can’t pull or carry the load of a heavy ½ or ¾ ton rated pickup truck, for 2016 Honda promises a payload capacity approaching 1600 lbs, while maintaining that car-like drive and ride experience.

As to towing capacity or limitations, Honda has yet to release final specifications for 2017 Ridgeline. We look to the all new Pilot for a clue or two as to tow capacity, discovering that Ridgeline should handle 5,000 lbs with no sweat. Good enough, 2017 Ridgeline must average 25 MPG combined to do so. looking to Pilot, that’s doable. For me the utility and ride comfort afforded to the end user by Ridgeline usurps the importance of combined driving fuel economy. Easily said in a day of $2.00 per gallon gasoline.