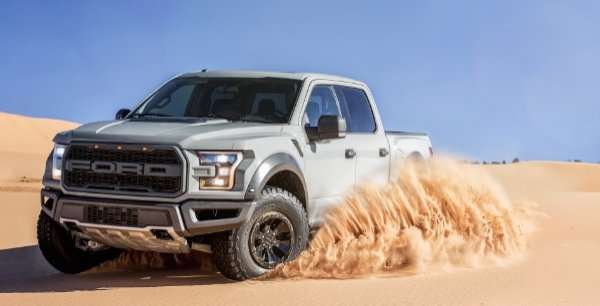 Ford Rolls Out a SuperCrew Raptor F150 in Detroit, Still No Power Numbers

Ford Motor Company introduced a new SuperCrew version of the 2017 Raptor F150 at this week’s Detroit Auto Show, but they still haven’t offered up all of the vital specs on the newest high performance SVT pickup.
Advertisement

Many people were hoping to get more official information on the 2017 Ford Raptor F150 at the 2016 North American International Auto Show in Detroit, but that didn’t happen. We don’t know much more now than we did at this time last year, shortly after the new Raptor was introduced to the world for the first time. However, even though Ford didn’t show any more of its cards on the 2017 Raptor, the company managed to make this new sport truck a key focus of their auto show effort for the second year in a row with the introduction of the SuperCrew Raptor.

2017 Ford Raptor F150 SuperCrew
The “new” 2017 Ford Raptor F150 introduced earlier this week at the Detroit Auto Show is mechanically identical to the SuperCab Raptor that was introduced at last year’s Detroit show. It has the same high output 3.5L EcoBoost V6, the same 10-speed automatic transmission, the same high tech four wheel drive system and the same high performance suspension setup. This newest Raptor also has the same basic exterior upgrades when compared to a non-Raptor F150, but the company has stretched the wheelbase to 145 inches to accommodate to normal sized doors rather than the short rear doors on the Raptor was met last year.

In addition to the larger door openings, the SuperCrew configuration adds rear passenger space and thanks to the aluminum body, this Raptor is around 500lbs lighter than the SuperCrew Raptor from the previous generation F150.

Like the Raptor introduced at last year’s show, the 2017 Raptor F150 in SuperCrew form should be better than the previous generation in every way. Unfortunately, since we still don’t have engine specifications on the SVT-tuned EcoBoost V6, it is hard to say just how much better it will be. Ford has officially promised that the new Raptor’s EcoBoost will make more than the 411hp and 434lb-ft of torque from the past models, but that is the closest thing to an official power estimate we have seen. Unofficial comments from Ford execs have suggested 450 horsepower, which would make it considerably more powerful than the 6.2L V8 that powered past models, but those are all unofficial so we can only count on them so much.

Considering that the new Raptor F150 has been marketed as a 2017 model year vehicle since being introduced at the 2015 Detroit Auto Show, it seems likely that we will get the full specifications on this beast within the next few months. Many 2017 models will begin going on sale later this summer and while the Raptor could be a late arrival, it is still likely to hit showrooms by the end of this year. A late year arrival would mean that it would go on sale in the fall and since it is hard to sell a performance vehicle without power numbers – it shouldn’t be long before we get the official horsepower and torque figures for the newest SVT pickup.