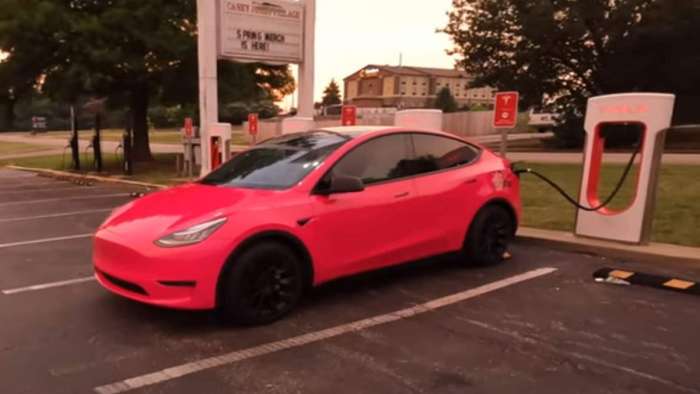 The Truth About the Tesla Model Y After 40,000 Miles

There is an owner of a 2020 Tesla Model Y who shares how much of a good job Tesla has done with their vehicles and his experience on road trips and what service was required after 40,000 miles.
Advertisement

The Truth About the Tesla Model Y After 40,000 Miles

There is an owner of a 2020 Model Y, with 20 inch induction wheels, who has driven the car over 40,000 miles and shares his experience and review of the car. Let's see what he had to say.

Gjeebs shares his review of his 2020 Model Y. The only service he needed to do was with his brakes, which he didn't use that much due to regenerative braking. The thing he loved the most about his Tesla is the auto pilot system. It comes with every Tesla and doesn't cost extra. To engage, you just double tap the stalk on the right side of the steering wheel.

On road trips, you do have to occasionally touch the wheel, but when you do that, Tesla auto pilot will keep you centered in your lane. Sometimes, the car has phantom braking with shadows under bridges and you just have to be paying attention at all times.

Full self-driving is still in its Beta form and Gjeebs has not purchased it. He doesn't see the value in it yet, but does think it will get to full autonomy eventually. Occasionally, if you get to close to a car in front of you, the car won't quickly pass the other car as it should. Still, Tesla auto pilot is incredible and takes a lot of strain off.

Other Features of Tesla

Tesla will take care of your navigation for you on any trip you take. It will map out any Tesla superchargers you need to visit to keep your battery topped off. You can put your car in chill mode, which will make the car less aggressive.

There was the sound of something rubbing in the car while he was driving and he was trying to figure it out, but wasn't able to. The car is still a pretty luxurious car. You can tune the inside of the car with the seat and steering wheel to be exactly where you want it.

There is some sound deadening material that was hanging off the side of the door and peeling off. When you buy a Tesla (an electric car), you have to charge your car, either at home, or at super chargers/3rd party chargers. The car itself is a little more expensive, but charging is much cheaper than gas. That's a big advantage of his Tesla.

There are some cafes or places to stay at near Tesla super chargers. Those are great destinations. The things that stood out about this owner and his Tesla Model Y is that he focused on how enjoyable the car was and how that the only service he had to do was a checkup on his brakes. He had to replace two tires for being flat. The tires run at 42 PSI whereas other tires run at around 34 PSI. He also broke his windshield and needed work done on that.

The car has been an incredible experience for him and he loves owning his Tesla. There is also an Optiwatt app that shows only charging stations that use renewable energy if you want to be fully integrated with green energy.

What do you think about Gjeebs experience with his 2020 Model Y? Would you get a Tesla Model Y?