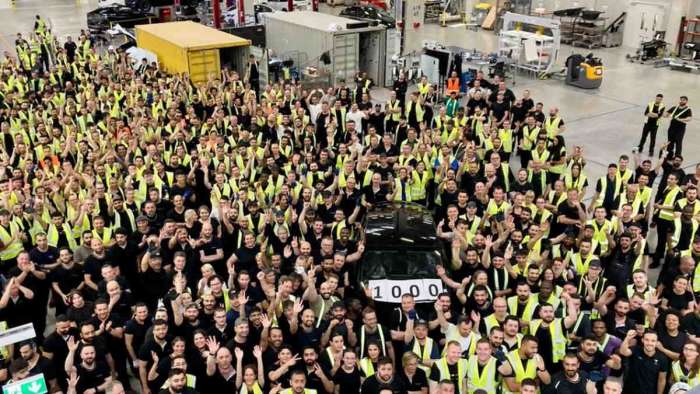 Tesla just posted on its Twitter account that Giga Berlin has reached a milestone of production at 1,000 vehicles (all Model Y) in just one week. Very impressive considering this is a new factory and has been up and running for only a couple months.

Unfortunately, delays and "red tape" delayed Giga Berlin, but the giga factory is now finally up and running due to Elon Musk and Tesla's perseverance in moving forward the mission of sustainable energy.

This isn't Tesla's only new factory up and running. Giga Texas is also a new factory and is ramping production of Model Y vehicles (and some with 4680 batteries), as well as the upcoming Cybertruck, which is set to be released in 2023.

Tesla has had to ramp both of these factories despite a trouble economy and supply chain issues where parts and supplies are hard to come by and raw materials, like Lithium, are increasing in price. Despite all these difficulties, Tesla is making progress and ramping production.

Tesla wanted to get to 1,000 units per week by the end of April, 2022, but it was not to be due to delays and red tape. Still, achieving this milestone on a couple months after its original goal is impressive. What's even more impressive is that Tesla was producing around only 350 vehicles per week just two months ago at that time.

What was one of the major bottlenecks to increased production? News has it that the paint shop was the bottleneck. This makes sense to me because Giga Berlin's paint shop is a new type of paint shop that Tesla has never utilized before and there had to be an adjustment period.

Tesla now has an additional 50,000 vehicles per year added to its annual capacity, but this number is deceiving. The year is not even half over and Giga Berlin didn't get going until just a couple months ago and it has already greatly increased its production. I would not be surprised to see Giga Berlin reach 5,000 vehicles per week - or more - by the end of the year, creating an extra 250,000 vehicles of production capacity for Tesla.