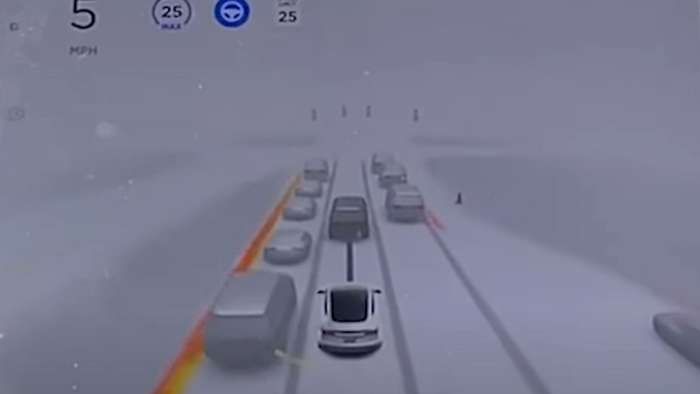 Tesla FSD v9 Beta - How Long Will It Last?

Tesla released its FSD v9 Beta full self-driving software about a week ago. It's a pure vision approach to full self-driving. But, how long will this Beta last? Are we close to a release to all Tesla FSD customers? Let's find out!
Advertisement

We've seen a bunch of new videos come in for Tesla's FSD v9 Beta since it was released. If I were just starting to follow the Tesla FSD v9 Beta, I would start with these 5 FSD Beta testers who are a must follow.

We've seen the vision only system from Tesla navigate some tricky construction, something that it hasn't been successful with in the past:

And that is one things that has been an improvement in the new Tesla FSD v9 Beta, it is doing better at reacting in real-time to situations. The graphical user interface is also much improve, making for a slick and smooth experience.

To put it simply, the Tesla FSD v9 Beta has a slick new UI, and seems to be a little bit better than the previous version. But there is much more room for improvement.

Where the Tesla FSD v9 Beta is Lacking

The Tesla FSD v9 Beta is lacking in its ability to understand other people and gestures. But, according to Elon Musk, future versions of the FSD Beta will understand hand gestures and sounds. This is a necessary step for level 5 full self-driving because the car will need to be able to react to construction workers and police officers when they are giving directions for where the car should go.

Tesla also has some things up its sleeve for future versions of its FSD software. One of these is real time detection of changes in the environment, such as snow, rain, or obstructions that happen in the road.

Future versions of the software will also need to have very specific drop off points, down to the foot/meter for when robotaxis start to launch. The car will need to better be able to navigate parking lots, something it currently struggles with. Here's an example where it did navigate a parking lot well:

The Tesla FSD v9 Beta is also lacking in its ability to see everything. There were some pillars from the monorail that it wasn't seeing and almost drove into from the user HyperChange:

The system will need to recognize all objects in the world and be able to deduce what is a barrier and what is not. It will also need to not change lanes on a 2 way street, which it has done sometimes.

The Future of Tesla v9 Beta

With all the improvements needed for Tesla FSD, what will be done in the future to make it fully autonomous? Here's what I see happening:

Tesla will fix the issues with all solid objects so that the car doesn't try to navigate into a pillar.

Tesla will make it so that gestures and sounds are understood. If there is a visual indicator of an ambulance or emergency vehicle, and a siren is sounding, the car will navigate to the right the best it can.

The visual interface will start to include turn signals, better visualizations of vehicles, trains, people, and animals.

Tesla will have a better understanding of how to handle construction when the lane markings aren't what should be followed, but instead a pattern of cones.

Tesla FSD will evolve such that it can make very difficult unprotected left hand turns. The ability to make those turns consistently will be a very good sign that full autonomy is getting close. I think we are 6-12 months out before this is out of Beta and another year or two before level 5 autonomy.

What do you think about Tesla FSD v9 Beta? Is it close to getting to level 5 autonomy, or is it many years out?