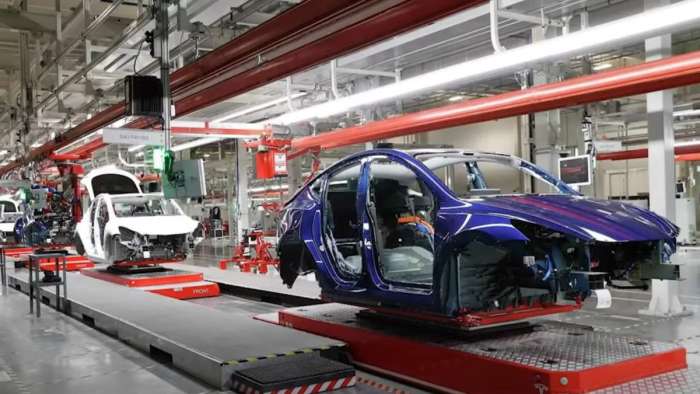 How Much Money is Giga Texas Burning Through for Tesla?

Elon Musk stated that Tesla's Giga Texas is burning through cash. Does that mean billions of dollars or is it less than that? Let's look at one analysts view on what he thinks it is.
Advertisement

How Much Money is Giga Texas Burning Through for Tesla?

Elon Musk has mentioned that Giga Texas and Giga Berlin are burning through tons of money at an insane amount - cash furnaces that are costing Tesla a lot of money. Just how much money are they costing Tesla?

Tesla Economist is one of the best analysts of YouTube when it comes to how Tesla is doing. He makes a very detailed attempt to try and dissect Tesla and their financial impact from Tesla Giga Texas. This way, there won't be a surprise.

To start with, he took the past history with the Fremont factory in order to get a rough idea of how it ramped production. This factory opened a Model 3 line that ramped from 1,550 per quarter to 28,578 per quarter in just 3 quarters. Model S and Model X deliveries were about the same over that same period of time.

The extra cost for the Model 3 line in Fremont was $268 million. This was just the cost for running the Model 3 line at low production speed. This includes some extra Model S and Model X production. You can look at this as the initial ramp up cost. This is all associated costs and hopefully the new line might cost a little less and have less labor.

The total estimated cost for Q2, 2022, for the Giga Texas factory opening up is $150 million. This is due to improved efficiencies, 4680 batteries, more robots, less labor, and less space being used.

Using Giga Shanghai as an Analysis

Shanghai built a Model 3 and Model Y factory, a phase 1 and phase 2. The new Model 3 factory wasn't using the most efficient castings either. This opened on October 24, 2019. Even with these numbers, we won't get completely accurate numbers.

He looked at 3 quarters of Giga Shanghai and had some difficulty getting an exact number for cost, but there was no clear pattern to follow. The Model 3 data wasn't consistent.

You can look at the Model Y line that was added in phase 2. The cost for the Model Y ramp was about $397 million dollars. Is that what the new factory will cost to run? No - because you were also producing vehicles that made money. There is a total difference of about -$26 million dollars, which means Tesla made money on their ramp.

The new Model Y factory in Shanghai did not cost -$26 million. But it's probably more around $100 million to run the factory for a quarter.

Giga Texas might cost around that amount and there is probably not a case where the new Giga Texas factory is costing billions of dollars. It's probably costing more on the order of $100 to $150 million dollars for Q2, 2022. As the factory ramps production, this cost won't be as much.

Neil T wrote on July 1, 2022 - 9:16am Permalink
Tesla is averaging $50k revenue per vehicle and around 34% gross margin. If we take approx 5,000 vehicles sold in Q2 and take 50k sale price and 30% gross margin, Tesla made $75m on the cars it sold from Texas in Q2. Now we know that the sales were predominantly performance so that is likely an underestimate. In Q3 Texas will switch from money furnace to cash pile. At 250k per year, around $1.25bn a quarter gross margin. Giga Berlin and Giga Texas were both identified by Musk as a $10bn investment over 10 years. So they were expected to burn money. Points to note. Tesla took a large loan to build Giga Shanghai. Whilst buying and building both Berlin and Texas, Tesla paid back this loan and funded the builds out of cash flow. Another point to note. Whilst VW made $56bn gross profit in 2021 and 19% gross margin, they only made 8% net profit. Whereas Tesla made over 20% net profit in Q1 2022. Should Tesla fully ramp both Texas and berlin in 2022, then in Q1 2023 Tesla will be exceeding VW 2021 quarterly net profit. As a reminder, VW group is the second largest vehicle manufacturer in the world and Tesla's greatest EV competitor outside China. When we talk revenue and profits, far from VW catching Tesla and overtaking them, the opposite is true.