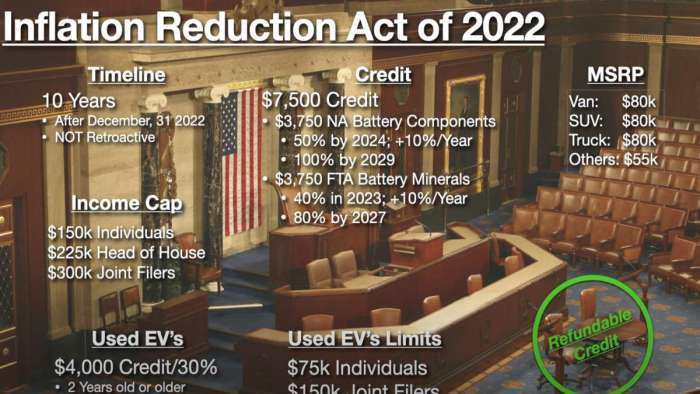 EV Tax Credits Are Coming Back - How Tesla Benefits

The EV tax credit bill is back and is trimmed down to a much simpler version. This bill will benefit Tesla. Let's go over the bill and how Tesla benefits.
Advertisement

EV Tax Credits Are Coming Back - How Tesla Benefits

There is another proposal of a slimmed down version of the Build Back Better bill and is about $433 billion in spending and about $739 billion in revenue raised. Let's see how this benefits Tesla.

What is included in the latest version of the tax credit bill? Let's outline what it says:

Timeline
* The timeline for the bill is until December 31, 2022
* This credit is NOT retroactive - you won't get it for EVs you bought in 2022 and had delivered this year

This is a refundable credit, which will be realized at the time of purchase.

How This Affects Tesla

Tesla will be affected by this bill for the RWD Model 3 with LFP batteries, which is about $46,500 right now, as well as with both versions of the Model Y - the performance and the long range, which are still less than $80,000 and SUV vehicles.

Tesla doesn't have a demand problem and these tax credits will take Tesla to the moon as stated a while ago.

What do you think about the proposed tax credit bill? Is this good for Tesla?

For more information, see this video by Bearded Tesla Guy:

John Goreham wrote on July 29, 2022 - 2:09pm Permalink
Good for Tesla? Seems likely. Good for Tesla buyers? I don't see how. Won't Tesla simply raise prices (again and again), knowing consumers will have a rebate in hand? This looks to me like a way to increase the purchase price of a car using unnecessarily-complex math and excluding many upper-working-class households from the rebate program. If you make $151,000 you get no rebate. If you make $149,000 you get $7500 on qualifying purchases? How is global warming reduced by excluding the folks most likely to have money to buy one or two EVs?
Tom wrote on August 1, 2022 - 12:18am Permalink
What's also not clear if Tesla base model will even qualify because it has LPF battery made in China.