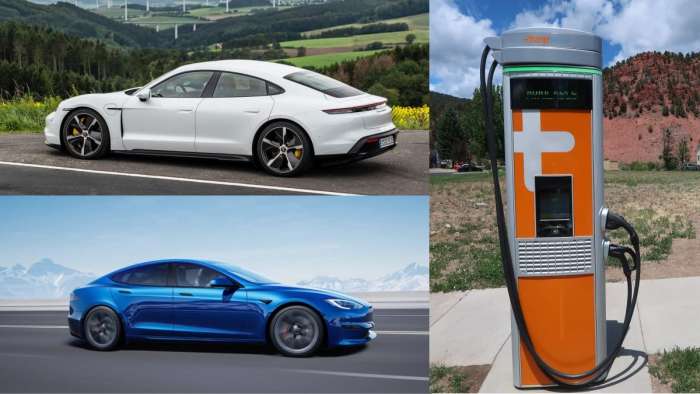 The Porsche Taycan And Telsa Model S Can Charge In Just Minutes! Time For A Road Trip

With vehicles like the Tesla Model S and Porsche Taycan being able to charge several miles worth of power in a single minute, the era of range anxiety appears to be approaching its end. Many potential owners felt that the long charge times required for many electric vehicles were prohibiting them from purchasing one, but as fast charging stations pop-up across the world, that may be less of an issue.
Advertisement

A lot of car owners do not have easy access to a plug to charge their car. A huge number of people live in apartment buildings that have parking lots and towers with 1 or 2 charging unites in them. I have rarely seen outlets to even try to plug a level 1 charger into in most apartment complexes that I’ve lived in. EV owners like to brag about never stopping by gas stations because they can charge up over night and they drive within the range of their car during the day, but they might not have that opportunity if they live in an apartment complex or even a nice townhome. If they’re unable to charge during their downtime at home, they’ll have to charge while they’re out.

I’d also note that those same drivers that have little easy access to a normal outlet will probably have even less access to the 210-volt outlets required for at-home level-two charging. Level 2 charging allows a high-capacity battery, like that found in a Tesla Model S or Audi E-Tron GT to charge in just about 6 hours, rather than literally days for a level 1 charger. My family had a new 210-volt plug added to the exterior of our home so that we’d have easy access to it to charge the Fusion Energi that we own. Even though it only gets about 25 miles on its limited battery (limited to make space for the engine and transmission used to make the vehicle a hybrid as opposed to a BEV with a range extender), the Fusion still takes a few hours to fill up with a level 2 charger.

The real fast charging today, though, is level 3 charging technology, like that found in Tesla Supercharger stations. DC Fast Charging is the non-proprietary way to discuss the 3 EV charging level. It allows a vehicle to charge up to 30 times faster than a level 2 charger would, so that 6-hour charge turns into a 30-minute wait for full power. It’s a good thing that these charging times are getting shorter, too because we’re seeing long lines at a lot of the faster charging stations, with some of the queues requiring drivers to wait for hours to plug in their car.

More DC Fast Charging stations are coming out, but level 3 charging is not currently feasible as an at-home solution because it uses higher voltage than most homes have available. It’s estimated that each DC fast charger costs about $76,000 anyway, which would buy you a second car in some instances, and many vehicles, the Fusion Energi included, cannot partake in DC Fast Charging yet anyway as their charging architecture was developed before that tech was the norm. DC Fast Charging is exactly what EVs need to be competitive in the wider world with ICE cars and it’s becoming more and more common. Unfortunately for folks in rural areas, these fast chargers may be few and far between for a while yet.

As much as I think it would be cool for Hydrogen ICE cars to have their own epoch, I fear it may be too little, too late at this point for that budding technology. DC Fast Charging is the start, but as GM releases the Ultium battery, we’ll also see increased charging speeds. Better batteries are on the way. Mercedes is already bringing solid state batteries to the auto-sector, and the battery start-up, Solid Power is slated to work with both BMW and Ford to try to create more efficient batteries that can store more power for the future.

The current state of the world is such that you have to plan your long range trips if you’re driving an EV. You cannot just assume that you’ll run into the right kind of charging stations on your trip, unfortunately. It’s not difficult to plan out your trip, and it’s honestly a better idea to plan trips than to just wing it, so that’s not too terrible of a thing. We all know that plans can fall apart, so it’s important to have. Once more fast-chargers are available, I think even folks that may not be able to charge at home can still feel comfortable owning an EV because it'll be more akin to owning a regular ICE vehicle.