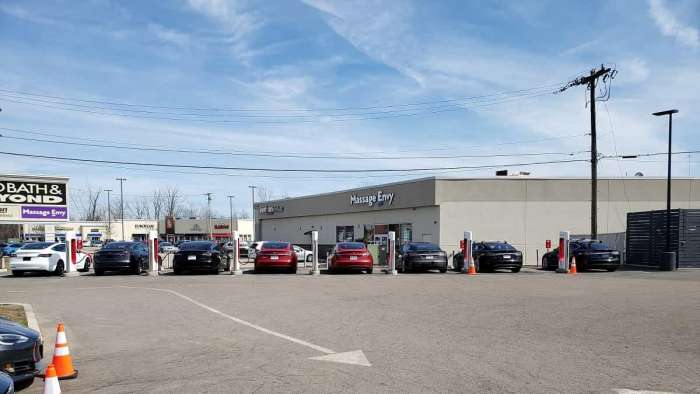 Tesla Addresses Crowded Supercharger Sites With Percent Charging Limits - What Is Your Time Worth?

Tesla will limit the amount of charge an owner can get at some Supercharger sites to address overcrowding.
Advertisement

Due to overcrowding and long wait times at some Supercharger sites, Tesla has taken a new step. At certain crowded Supercharger locations (not all), Tesla will now limit the total charge that an owner can receive to 80%. If you understand how electric vehicle batteries work, this makes sense.

Not all Superchargers are busy. Tesla knows this and the plan to limit the amount of charge will not be universal. Many locations will remain uncrowded and at those stations, owners can charge up to 100% if they wish to wait that long. This new plan comes on the heels of Tesla increasing speeds at Supercharger locations, so the evolution of the Supercharge network is not at all negative. In fact, any fair observer would conclude that Tesla is so far ahead of its peers in the EV market that it is unlikely any will catch Tesla soon. In fact, only Tesla has its own captive network.

We must tip our hats to the Tesla advocacy publication, Elektrek, for breaking this story. In Elektrek's reporting the site says that it has seen a Tesla memo that states the following:

Today, we released a new Supercharger feature that will limit owners’ State of Charge (SOC) to 80% at select high-traffic sites. 80% SOC Limit will be enforced 24/7 at all impacted sites. Please note, some sites will have 80% SOC limits enforced on a permanent basis while others will only be enforced on national holidays and to accommodate large regional events (e.g. Coachella). When combined with the recently released On-Route Battery Warmup feature and V2 Supercharger upgrades (to 150 kW), we expect 80% SOC Limit enforcement to result in a 34% improvement in throughput at our busiest Supercharging locations – creating a better, more efficient Superching experience for our owners.

Waiting in line to charge an EV is a potential problem for the EV industry. Back when Tesla first launched the Model S, the company created an online "calculator" that would show you just how inexpensive its vehicles were to own. In that calculator, Tesla allocated time-saving to its benefit. The idea was that you would save money by not having to "search for gas." The concept was ridiculous then, but now with Tesla's stacking up at some Supercharger locations, it is obvious that the "cost of saved time" is really in the ICE cars' camp, not the EVs'.

We would be surprised if many Tesla owners object to this new limit on charging. Many EV owners already weight the time value of charging past around 80% and only top off to full when the car is parked at the home charger and time is not an issue. Others feel that the battery remains "healthier" if not charged to 100% full frequently anyway. With such long range, a Tesla can be driven for many hours without needing to charge to full. This remains one of Tesla's key strategic advantages in the market.

If you own a Tesla or another EV, please tell us how you charge, and what you think of Tesla's new limits in the comments below.

Image Note:
Top of page image taken by the author shows the Dedham, Mass. Supercharger location at full capacity, mid-morning on a workday in April 2019.

DeanMcManis wrote on May 29, 2019 - 3:37am Permalink
I think that the reason that many Tesla owners charge their cars at Supercharger stations is that it is simply free for many owners. I do not know of ANY gas stations that allow you to fill up for free. Realistically I would say that most of the Tesla owners charge up at home, and because of the longer range they do not need to recharge every night. So with cheap at home charging I would guess that most of the people using Superchargers are going longer distances. From what I heard if you have the Tesla onboard computer plan your long distance trip then the 80% cap is bypassed. Since the 80% charging is so much faster than the remaining 20% it makes good sense to cap off longer charging for those people who are just doing it because it's free.
Col Mosby wrote on May 29, 2019 - 12:58pm Permalink
Tesla has obviously biven up on Supercharher networl expnaiosn and is fitting all Model 3 Vcar with VCCS porotocol adapters although teh Model 3 can only recharge at a 200KW max Tesla is falling behind inrapid recharging