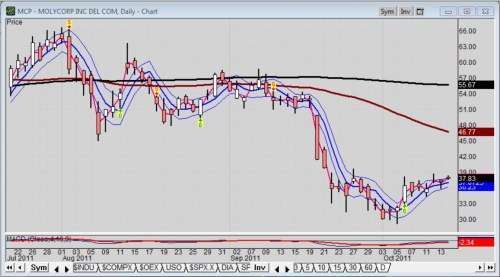 In statements before Congress, Molycorp described China, which now controls some 97% of the world’s supply of rare earth metals, will continue to limit exports of the valuable elements, restricting its supply largely to domestic customers. Question is, can the supply of non-Chinese miners like Molycorp meet future demand of electrified vehicles?
Advertisement

As part of its forecasts for rare earth metals, Pike Research as far back as May noted demand for rare earths in the clean-tech industry will reach 12,920 tons per year by 2017, up from approximately 9,000 tons annually in 2011, which could place an increased strain on global supply for these emerging applications.

Pike Research’s report, “Rare Earth Metals in the Cleantech Industry”, provides a comprehensive analysis of supply and demand dynamics, assessment of risk, and pricing scenarios for the utilization of rare earth metals in clean-tech applications. The study includes profiles of key industry players and their strategies to address the need for rare earth metals in the clean-tech industry. Detailed demand forecasts, segmented by rare earth metal, application, and world region, are provided through 2017. An Executive Summary of the report is available for free download on the firm’s website.

One can now see why the Copper Development Association made its presence known at The Business of Plugging In 2011 in Dearborn, Michigan which ended yesterday. Fact is, copper rotors used in IM motors can replace permanent magnet (PM) motors that depend on rare earth magnets. Tesla is the first to use such copper-laden motors with great success, and the supply of copper is ubiquitous. Read: Copper Development Association scores well at The Business of Plugging In 2011

On the other hand, Molycorp is an American-based supplier of rare earth materials who sees the need and intends to take the opportunity to step up production.

“China is clearly warning that they will consume more of their own rare earths and export less,” said Mark Smith, CEO of rare earth mining concern Molycorp, “and that they see tight supplies of rare earths as representing an ‘irreversible’ trend.”

That means companies like Molycorp, which owns the Mountain Pass rare earth mine in California, must ramp up supply to meet demand from non-Chinese manufacturers, and that prices for elements like cerium, lanthanum, and neodymium will remain high.

The weekly chart provides a higher-level look at the past year’s performance for Molycorp stock. Its IPO started in July of 2010 at 13.25. It increased volatility and rose as high as 79.16 in May, 2011. Since then, the stock has been in downward trend like the rest of the general market.

Question is, will the trading community view this latest statements before congress along with the Pike Research forecasts as sufficient to establish a near-term bottom for Molycorp stock? The latest swing low stands at 29.19 and is, therefore, a level of price support at this time.

Anonymous wrote on October 14, 2011 - 1:54pm Permalink
Are you recommending we buy a stock that has decreased in value by 50% since January? Why?
Frank Sherosky wrote on October 14, 2011 - 6:29pm Permalink
I'm not recommending any stock as implied in my disclosure statement. I merely report on the fundamentals and technical condition of a stock that is related to the auto sector, which is what TN is all about. The decision to buy, hold or sell is always in your hands. The article merely shows the fundamental supply/demand situation is changing and MAY have an effect on the stock price dynamics. That is why I point out the support and overhead resistance levels, as a help so you can make up your own mind based on your own analysis. By the way, legendary trader, W.D. Gann once wrote that "timing is more important than price."

Tsingshan's Threat to Tesla: EV Maker Is In Battery Crosshairs
Tesla-Funded Research Reveals One of The Biggest Mysteries of EV Battery
END_OF_DOCUMENT_TOKEN_TO_BE_REPLACED