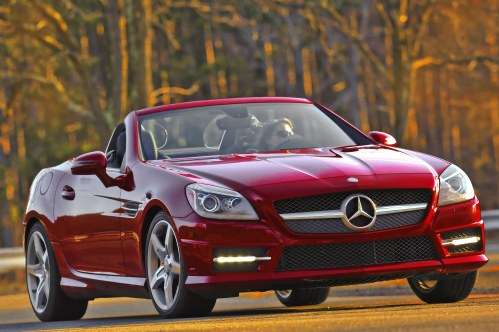 Furthermore, the news release via MBUSA.com revealed the high-performance CLS63 AMG will be priced at $94,900.

For the record, as Mercedes-Benz is a worldwide manufacturer of cars, trucks, and vans, it is owned by Daimler AG (formerly Daimler Chrysler), and trades under the ticker symbol "DAI" on the Frankfurt and New York Stock Exchanges. The stock closed yesterday at 51.48 Euros.

The 2012 Mercedes-Benz SLK coupe/roadster represents the third generation of a two-seat sports car that rocked the automotive world when it unveiled the first automatic retractable hardtop in modern times. With the top up it's a quiet, weather-tight coupe – push a button, and 20 seconds later the car is topless. Like the retractable hardtop of the larger SL model, the rear window of the SLK pivots to match the curvature of the top as it's being lowered, providing more trunk room than ever.

The SLK350 is powered by a new 3.5-liter V6 that features direct injection and multi-spark ignition. With even more power and better fuel economy than its predecessor, the new SLK engine generates 302 horsepower and 273 lb.-ft. of torque.

The four-passenger 2012 CLS coupe represents the first major redesign of a car that established an entirely new market segment – the four-door coupe, which combines the emotional appeal and dynamic design of a coupe with the comfort and functionality of a
sedan.

Mercedes-Benz USA, headquartered in Montvale, New Jersey, is responsible for the sales, marketing and service of all Mercedes-Benz and Maybach products in the United States. For more than forty years, MBUSA has taken pride in its commitment to the customer by providing superior quality luxury vehicles coupled with outstanding customer support.

A division of Daimler AG, MBUSA is also responsible for the distribution, marketing and customer service of Mercedes-Benz Sprinter vans in the US. More information on MBUSA and its products can be found at www.mbusa.com, www.maybachusa.com and www.mbsprinterusa.com.

Mercedes-Benz M... wrote on May 13, 2011 - 10:34am Permalink
Glad to hear the price sum... but, it is still expensive for me :)
chrishillesland wrote on July 14, 2011 - 9:13am Permalink
This SLK Roadster and CLS Coupe has very good features but the prices are quite expensive or maybe it's just out of my league. There is a very big improvements in engine, hp, and other <a href="http://www.racepages.com/oem/mercedes_benz.html">mercedes parts</a> which is very evident.