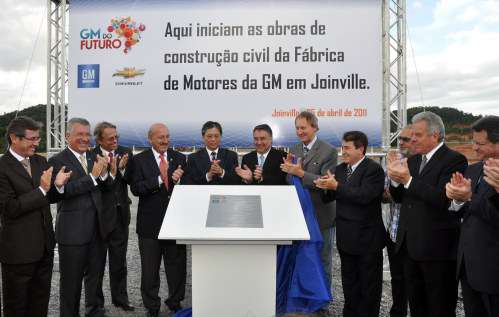 GM do Brasil on Monday laid the foundation stone for a new engine plant in Joinville in south Brazil that will make engine components beginning in 2012.
Advertisement

Think 120,000 engines and 200,000 cylinder heads per year beginning in 2012; and, while those are just the initial figures, further think supplying two assembly pants from one strategic location.

According to the news release, $205 million (R$ 350 million) will allow the initial production capacity of 120,000 engines and 200,000 aluminum cylinder heads per year to supply the Gravatai (Brazil) and Rosario (Argentina) plants.

From a stock investor perspective, General Motors (NYSE: GM) is making the fundamentals of supply meet demand in that region. That alone may help investors realize that GM stock may be a value play as the stock recently traded under $30 well below its IPO price of $33. The stock is still hovering above 30 but still below the IPO price, opening on Thursday in New York at 31.76.

“Joinville is a strategic place for us in terms of location because we can reach our two plants in a very short commute,” said Marcos Munhoz, vice president of GM do Brasil Communications, Public and Governmental Relations.

More than 500 construction jobs are supporting the plant construction The new facility has 500,000 square feet with part of the space set aside as an environmental conservation area.

“One of our main objectives is to implement our project in Joinville in a environmentally friendly way in order to be able to achieve the Leadership in Energy and Environmental Design (LEED) certification in Brazil represented by the Green Building Council Brasil – GBC Brasil,” said Jose Eugenio Pinheiro. GM South America vice-president of Manufacturing, Jose Eugenio Pinheiro.

Elsewhere in the news release, Brazil was noted as the fourth-largest automotive market in the world and the third-largest market for GM globally in 2010. Brazil is part of the South America region, which in 2010 increased production for the fifth-consecutive year, GM sales in the region reached 1.026 million units, led by Brazil with 657,000 vehicles, a record for the region and for the Brazilian market.

For the record, Chevrolet has been the market leader in the South America for 10 years and has 19.9 percent share in the region.

-----------------------
About the Author: After 39 years in the auto industry as a design engineer, Frank Sherosky now trades stocks and futures, and writes articles, books and ebooks via authorfrank.com, but may be contacted here by email: [email protected]

Tesla Contemplates A New Strategy for China Retail even As Sales Boom
Jay Leno on Elon Musk & EVs: “I Think He Should Get ... Credit"
END_OF_DOCUMENT_TOKEN_TO_BE_REPLACED