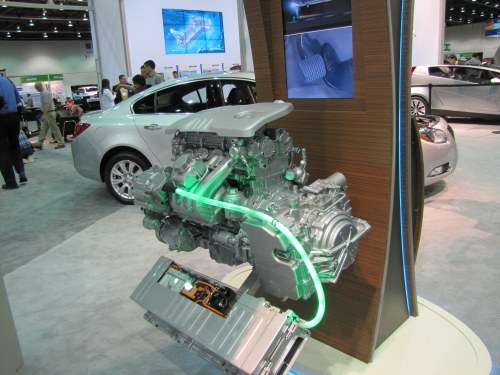 Fact is, touting variable valve timing as part of marketing dismisses real fuel economy needs of consumers. In other words, it’s too little, too late in light of gasoline prices which have just surpassed the capability of available engine technology.

The photo shows a mild hybrid called eAssist(TM) by GM. It, too, contributes toward better mileage, but it has an additional up-front cost associated with it that not all auto owners can afford, mild or not; and it does not contribute as much to city driving where most of us travel.

So, Chevrolet and other auto manufacturers may have to go beyond touting its variable valve timing and mild hybrids to meet customer expectations.

VVT technology is true for most other auto engine lines as well, including Ford EcoBoost; as are direct fuel injection and turbo-charging. So, why so much pride from automakers when it is merely one small piece of the fuel economy puzzle?

Point is, VVT (variable valve timing) has literally become the defacto standard for most engines these days. Yet, nobody is getting 40-mpg in the city except for an occasional Asian make with a hybrid feature.

As a point of reference, realize the driving range of 40 miles has been deemed by the government as average driving. It’s the basis for the Chevy Volt extended range.

Problem is, gas mileage in today’s engines is far better than what used to be produced, but not enough to squelch the anxiety from paying over $4 per gallon. Sure, prices may wane on a down swing of the futures market, but don’t count on prices staying low forever.

GM marketing may think it makes sense for Chevrolet powertrain engineers to tout VVT, but they are also blowing smoke for the lack of practical gas mileage figures. What good is the latest technology if it cannot keep up with the pain of gasoline prices?

By comparison to a medical condition, it’s like touting an off-the-shelf pain reliever when the patient needs morphine.

Sure, Chevrolet and others are correct in that proper breathing is critical to maintaining peak engine performance under all conditions. Getting air in and exhaust gases out of the combustion chamber under all speeds and driving conditions is essential to outstanding drivability and fuel efficiency with low emissions.

“Whether powered by four, six or eight cylinders, virtually every current Chevrolet car and truck from the compact Aveo and Cruze to the full-size Suburban SUV features variable valve timing (VVT) on its engine to optimize its breathing” said Sam Winegarden, General Motors executive director of Global Engine Engineering.

The camshafts are driven by chains from the crankshaft to keep the valve opening in sync with the motion of the pistons in the cylinders. Through continuous adjustments of the camshaft phasing, engineers can achieve smoother idle control without sacrificing the ability to breathe at higher engine speeds. This ability contributes to the 3.6-liter V6 in the Chevrolet Camaro generating 312 horsepower while getting an EPA-estimated 30 mpg on the highway.

Note, however, the continuous dependence on highway figures for mileage. That, in this reporter’s view, is a symptom of failure to meet the real needs of drivers, which is city driving. Only a corporate marketer would continue this mantra.

Chevrolet’s VVT system, for example, uses a hydraulic mechanism to twist the camshaft relative to the crankshaft position so that the valves can be opened and closed earlier or later. On dual overhead cam engines such as the Ecotec inline-four and the 3.0 and 3.6-liter V6, the intake and exhaust cams can be adjusted independently, allowing the valve overlap – the time that intake and exhaust valves are both open – to be varied as well.

The 60 degrees of camshaft adjustment available on the turbocharged 1.4-liter Ecotec that powers the Cruze enabled engineers to eliminate the conventional exhaust gas recirculation system to simplify the overall engine packaging – the way the engine fits in the car – and still reduce emissions.

“Bookending the Chevy lineup, the VVT-equipped Cruze Eco achieves an EPA estimated 42-mpg highway while the full-size Silverado XFE pickup is estimated at 22 mpg highway, both of which are best-in-class figures for their respective segments” said Winegarden. “In fact, the 2011 Cruze Eco is the most fuel efficient gasoline-fueled vehicle in America.”

I’m sorry, folks, but it’s hard not to challenge this marketing philosophy. For starters, these vehicles are very expensive relative to living standards. So, touting 42 mpg on the highway for the Cruze is still short in my view; and that is for a small car and the economy version as well. At a minimum we need 42 mpg in the city.

For sure, Chevrolet VVT and Ford VVT and Toyota VVT make a difference, but relative to the poor mileage of the past, and not that far back either.

That is why I have written about engine technologies which make a difference. We need air hybrids, Miller effect efficiency, etc. Get the picture?

Bottom line: GM, Ford, Toyota and the rest have to go to the next level in internal combustion engine development before I’ll praise their fuel economy marketing.