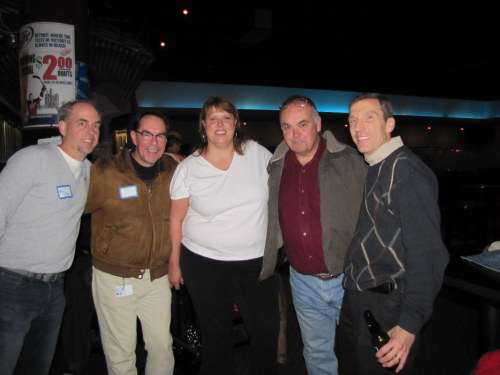 Yes, it is the culture that defined Saturn, more than the car, more than Spring Hill. That may explain why the former employees still meet once a year on the first Friday in December at Plush Pockets on Dequindre & 12 Mile Road in Warren, Michigan.

The Saturnites, the group name on Facebook, are now pulled together by Kim Knopp, who graciously took over for Sheila Depoorter as the lead organizer. Special thanks to Kim for taking that on; but an even greater debt of gratitude is owed to Sheila for her tireless efforts over the past 9 years in coordinating the group as well as the past reunions.

Now that I have been officially early retired for 3 years, and having been a member of the ’91 Launch Team when the first Saturn rolled off the line in Spring Hill, I especially look forward to seeing old friends and former colleagues. I guess it comes with age; only so many shopping days until Hanukkah!

A reunion in itself is not unusual for many companies, but Saturn employees always had a special bond that went far beyond paychecks. Anyone there would tell you the same thing - Saturn was the best corporate experience they ever experienced. I know many old GM people still don’t get it.

Engineering, design and technology within a corporate environment will always get you a car as an output. The key is getting that car out in a team atmosphere where respect and consensus rules the decisions. That’s correct. At Saturn, if you were only 70% comfortable with a team decision, you respected the team enough to be 100% committed to that decision once it was made. Furthermore, all employees agreed to that; well, almost all. Within every organization you have those people who are just narcissistic enough to scuttle the process, but they usually get promoted and sent to other divisions.

Saturn the car is now officially gone, as is the wholly owned subsidiary that incorporated it. At least the locals of Spring Hill is getting another project. So, good for them.

I always found it strange, though, how a company like Saturn could be wholly owned, yet its employees were still not counted as true equals within the GM corporate umbrella. It especially showed in 2008 when Saturn employees were segregated by GM when it came time to not counting their Saturn years toward GM’s early retirement supplement. I guess that was just more of the GM family treating the Saturn team like a bastard stepchild.

Oh well, life goes on. And that’s how I view all the people at the Saturn Reunion. They have all gone on with their lives, as I have; and some with very good success stories.

If nothing else, this year’s Saturn reunion proves once again that work is not the sum total of your life, but that the relations you gain in the process often become a part of your life. Yes, the spirit of friendship transcends the corporate bonds.

I had a great time seeing all the folks; but, like all other reunions, the 2011 Saturn Reunion is now history; and next year the group will meet again. None are getting younger for sure. So, for those who couldn’t make it, visit the attached video and photo sideshow; and try to make it next year as you were truly missed.

By the way, my reference to the Borg was a little off. It was supposed to be "You will be assimilated; resistance is futile." I recall one guy, who shall remain nameless, modeled a cube in UG like the Borg on Star Trek, then placed a GM logo on it. As Larry the Cable Guy might say, "C'mon, that was funny right there!"

On a personal note here: I still believe GM would have done itself a great favor if it had Saturnized rather than adopted its shape-shifting strategy, always returning to its old ways of more management layers as a solution. Then again, that's just my opinion. What do you think?

And if anyone has a set of pics they want to be added from last night, I can edit or make a separate slideshow.

Adam Yamada-Hanff wrote on December 4, 2011 - 8:26pm Permalink
I don't think any company with management that was as bad, and still is as bad as GM's, should have gotten a bailout. The stipulation should have been to get rid of 80%-90% of the management or make greater concessions. That goes for all those Banks too!
David Boze wrote on December 4, 2011 - 9:58pm Permalink
Frank, you are dead-on with all your comments. It was the best work experience we ever had. It was great to see everyone Friday night and I'll be sure to be back next year. At GM today when I see other Ex-Saturnites, we wink at each other and "get it" when it comes to all the things you stated in your comments. Whenever I get to work with an Ex-Saturn person, I know it will be a fun experience and we'll make it happen. Thanks for this article!
Sumie Thaker wrote on March 15, 2021 - 10:33am Permalink
I am former Saturn Employee. What is the phone number for get the information on Health benefit fund I have. I am not getting anywhere. If anybody know the direct phone number or any information, will help me.