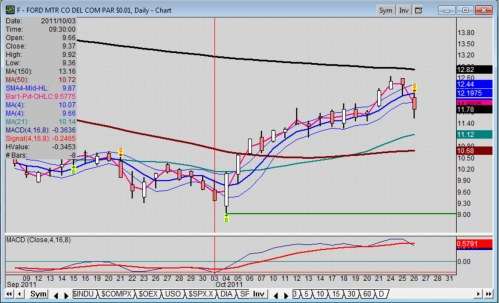 No need to read the fundamental report; all you have to do is take one look at Ford Motor Company (NYSE: F) stock intra-day and daily charts where price dynamics reveal the short-term trend bias has officially changed.
Advertisement

Stocks may miss earnings, but they cannot miss on future guidance; and that is what drove Ford stock lower in early trading. Even MarketWatch reported quickly that Ford Motor Company (NYSE: F) shares were among the hardest hit on the S&P 500 Index early Wednesday.

Yet, while Ford’s intra-day chart showing the first hour of trading reveals the demise, the daily chart so far (shown) shows Ford stock breaking below its 4-day high-low channel. Techncially speaking, the price dynamics do not lie; they reveal a breakout to lower levels.

The reason for the market reaction was obviously fundamental. Ford said its third-quarter earnings fell to $1.65 billion, or 41 cents a share, from $1.69 billion, or 43 cents a share, a year ago. Then Ford gave guidance for 2011 that did not sit well with traders: The company said unit sales in the U.S., its largest market, would likely be at the low end of its 13 million to 13.5 million estimate.

One might think that Ford stock would have perked up on the news that crude-oil futures added to losses Wednesday after a government weekly inventories report showed a higher-than-expected increase in crude supplies for the week ended Oct. 21.

For the record, the Energy Information Administration (EIA) said supplies rose 4.7 million barrels in the week. That compares with analyst expectations around an increase of 200,000 barrels, according to a Platts survey per MarketWatch.

Ford Stock Must Stand on its Own Merits

Aside from the external news, Ford stock has had its own price dynamic problems lately. It was just a week ago that I reported Ford stock was still in limbo, even after getting approval from the UAW for a new 4-year contract.

Perhaps the debt is having an effect, and missing an earnings reach is not helping; but the industry has been leaking out news that it was expecting total industry sales to drop slightly due to the economy.

On the product front, Ford automobiles look great; and the EcoBoost engine technology is giving V8 performance in V6 packages these days. For the record, this TN reporter will be attending Ford’s media event next week about upcoming products.

Assessment? What else can I say when the charts speaks so clearly? Ford stock is every bit on the start of a swing to the downside, as noted by the fallout below the 4-day high-low channel; and now it’s supported by a gloomy fundamental scenario. This could change, obviously even later today, but the news shock has had its effect on investors' psyches for the moment.

For the record, I hold no positions in Ford stock right now. If I believe Ford will rebound, then I might consider selling a downside put option in order to get paid while I wait to pick it up at a cheaper price. And right now that 50-day moving average and the latest monthly low of 9.05 are my support levels until proven otherwise.