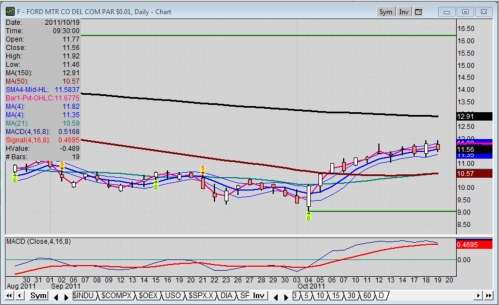 Recall that old Wall Street adage: Buy on the rumor; sell on the news. On the anniversary date of the October Great Correction of 1987, Ford Motor Company (NYSE: F) didn’t do much today, even after the UAW voted its approval of the new contract.

Fact is, Ford stock had already broken out of the 5-day high-low price channel on October 4th and rose as high as 11.93 on Tuesday, the day of the final vote by the UAW rank and file.

Ford needs to contain costs, especially labor costs, in order to be competitive. After all, unlike Chrysler and GM, Ford did not take any government bailout, which means it did not dump its massive bond debt obligations either.

That is why the company favors bonuses over raises to hourly rates. And now that the news of the new 4-year contract between Ford and the UAW has been approved, we can see details of the new contract.

The first major point for the workers is the $6,000 signing bonus. In addition there is a $1,500 lump sum cost of living bonus; but that’s not all.

Ford will create almost 6,000 new jobs around the country, and promised to invest over $16 billion on new product development by 2015. Fact is, $6.3 billion is going to prepare various American production facilities for future models.

There were a number of plant decisions, but one key plant addition in the new Ford-UAW labor contract stood out. It is the Flat Rock, Michigan plant, which currently serves as the home of the Ford Mustang and the next generation Mustang. It will also morph into a second source for the next generation Fusion production.

When the market doesn’t immediately respond to good news there can only be a few reasons. One is, traders need time to digest the net effect on future earnings. Second is, uncertainty about the general market still rules.

Frankly, I opt for that last one; but that’s just an opinion based on what I normally see with price dynamics when news comes out.

I wouldn’t be surprised if Ford stock made a statement tomorrow, but that general market is mighty powerful. Another factor is, Ford still has all that debt on its books; and while the new contract will help stabilize the future outlook, earnings require time to accumulate.