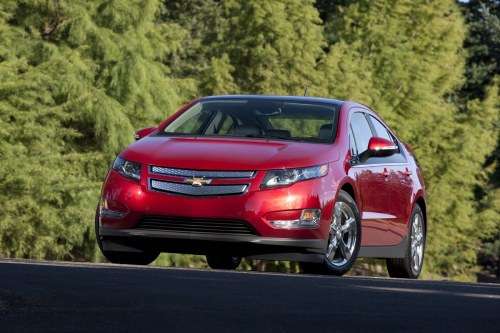 The Chevrolet Volt demonstration units are such a popular showroom draw that dealers are seeing sales rise as a net result. So, expect the demo program to expand.
Advertisement

Consumers like to look, touch and drive the Chevrolet Volt, the only electric car with extended-range capabilities. That’s why it’s part of the General Motors (NYSE: GM) plan to gain exposure for the vehicle and the Chevrolet brand.

According to the latest GM news release, almost 9 out of 10 customers who traded in a vehicle as part of their purchase are new to the Chevrolet brand. That’s precisely why hundreds of Volts that could be sold to individuals are tagged for dealers as demo vehicles, meant for customer exposure to the Volt and to other Chevy products they might otherwise not see.

“The Volt is clearly bringing new customers to our dealership,” said Rick Alpern, general manager of Keyes Chevrolet in Van Nuys, California. “We are seeing customers who own competitive brands that have never visited a Chevy dealership before. Now they have a Chevy on their shopping list because of the Volt.”

By the end of the year, more than 2,500 U.S. dealers will receive a dedicated Volt demo
Chevy expects to deliver Volts in all 50 states by the end of 2011. Deliveries begin in Virginia, Maryland, Delaware, Pennsylvania, North Carolina, South Carolina, Georgia, Florida, Oregon, Washington and Hawaii in the third quarter.

“We know the best way to experience the Volt is to get behind the wheel and drive it,” said Cristi Landy, Chevrolet marketing director. “An added bonus is that our dealers are seeing that the Volt is increasing traffic onto our dealer showroom floors and is exposing consumers to Chevys line of ‘gas-friendly’ vehicles, including the Cruze, Malibu and Equinox.

"It's tough to limit the number of Volts for sale to potential customers when demand is so strong, but the Volt has value to the Chevrolet portfolio well beyond incremental sales," said Landy. “Our Chevy dealers will keep their Volt demo units for six months and then they sell these units at the conclusion of the demo period.”

For the record, the Volt’s extended-range capability offers a total driving range of up to 379 miles, based on EPA estimates. For the first 35 miles, the Volt can drive gas- and tailpipe-emissions-free using a full charge of electricity stored in its 16-kWh lithium-ion battery. When the Volt’s battery runs low, a gas-powered engine/generator seamlessly operates to extend the driving range another 344 miles on a full tank.

This may come as a surprise, but Chevrolet in this release seems to shy away from the 40-mile extended range. Didn’t it used to be 40?

Perhaps the 35 miles appears to be the realistic value now that the car is out and getting real-world feedback, or Chevy marketing is being cautious these days. Previous news releases, though, have shown some savvy Volt owners achieving a month of driving without a gasoline fill-up, preferring to plug-in more often.

Regardless, news like that make people want to experience the Volt. They may not be able to afford one, but other Chevy models are available for their perusal.

In this reporter's case, as an early retiree, that Volt would fit my driving lifestyle quite well.