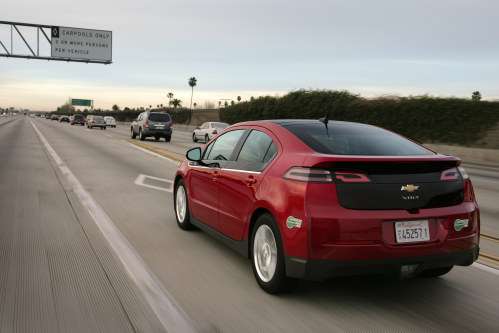 A low emission model of the 2012 Chevrolet Volt electric car are on their way to California, where customers will qualify for a $1,500 state rebate and be allowed to drive solo in the state’s carpool lanes.
Advertisement

Some may wonder why the IC Engine for the 2012 Chevy Volt didn’t get California Car Lane approval the moment it debuted. After all, it is fully electric for the first 35-40 miles, then the generator engine kicks in to charge the battery. Well, that ICE, although not propelling the vehicle directly but indirectly through the electric motor, still requires a special low emissions package to get the California Car Lane certification.

A low emission model of the 2012 Chevrolet Volt electric car are actually on their way to California, where customers will qualify for a $1,500 state rebate and be allowed to drive solo in the state’s carpool lanes.

According to the latest GM news release, Volts with the Low Emissions Package, which is standard for California, began shipping from the General Motors Detroit-Hamtramck plant this week and should begin arriving at the more than 140 participating Chevrolet dealerships in California before the end of the month.

"The Volts with the Low Emissions Package are certain to be a strong draw for California commuters looking to travel the state’s notoriously congested freeways in the carpool lane,” said Chris Perry, vice president of Chevrolet Marketing.

Commuters who use carpool lanes in Southern California save an estimated average 36 minutes a day, or about a third of their total driving time.

The California Department of Motor Vehicles is making 40,000 Clean Air Stickers available for registered vehicles that meet the state’s emissions standards. Applications can be downloaded from the DMV’s web site at www.dmv.ca.gov

Additionally, the new Low Emissions Package makes the 2012 Volt eligible for owners and lessees to receive up to $1,500 in state rebates through the Clean Vehicle Rebate Project. This incentive is in addition to a federal tax credit of up to $7,500 Clean vehicle rebate applications can be submitted online at www.energycenter.org

For the record, California has more than 1,400 miles of High Occupancy Vehicle lanes. Originally restricted to vehicles with two or more occupants to help minimize congestion, the lanes are now open to single occupancy use by owners of advanced, low-emission vehicles. Volts registered in Georgia, New York and Florida also are eligible for single occupancy access to carpool lanes.

The Volt has a total driving range of up to 379 miles, based on EPA estimates. For the first 35 miles, the Volt can drive gas-and tailpipe-emissions-free using a full charge of electricity stored in its 16-kWh lithium-ion battery. When the Volt’s battery runs low, a gas powered engine/generator seamlessly operates to extend the driving range another 344 miles on a full tank.

The most notable detail in the news release, though, seems to be the number of electricity only miles: Volt owners have traveled more than 10 million miles since the vehicle launched late last year; and roughly two-thirds of those miles were powered by grid electricity.

How the engine becomes lower emission was not made clear. Is it a smaller displacement? Not likely, but it probably has a tuned exhaust along with a specific zone of revolutions to maximize efficiency while lowering emissions.

This then begs the next obvious question: Why doesn’t GM offer a nat-gas option if clean and green is the name of the game? After all, nat-gas, although far less in number than gasoline stations, burns far cleaner.

Certainly GM has had sufficient time to consider this as an option. Talk about making a greener statement.