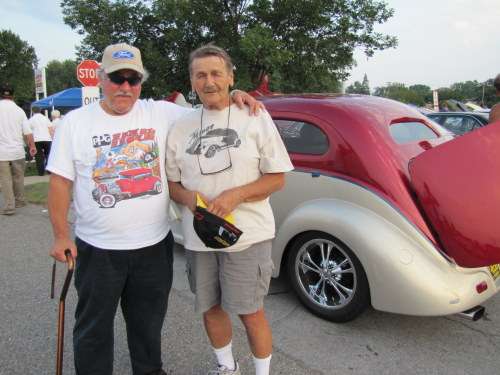 The Kiwanis Harper Charity Cruise on Wednesday, August 31 really delivered; and so did the 1937 Ford called “That’s Minor” which already won at Autorama, but is hereby recognized with the Torque News Class Act Award and memorialized with its own feature video.
Advertisement

This is what I like best about the Kiwanis Harper Charity Cruise: You get to experience cars and owners up close and personal; and the video below does far more justice to “That’s Minor”, a 1937 Ford and its owner and builder than all the words I can write here.

First, the car immediately caught my eye. It was the combination of body perfection covered by an exquisite two-tone paint job with a unique contrasting stripe separating the two tones. It had that Skip Foose look to it, too; then again, he did design the wheels.

Later, the hood tilted forward and I was able to see the Corvette engine. But wait, there was more, like a great story of two craftsmen who took nine years to finish the car, because they wanted to get it right. And they did, because the car won a special award at the 2011 Detroit Autorama.

Cool point about the car: Every time a major issue came up, the owner would say, “Hey, that‘s minor.” Hence, the name!

As much as auto enthusiasts like the Gratiot Cruise and the Woodward Dream Cruise, it is the close relationship between the cars and owners that makes all of us come back to the Kiwanis Harper Charity Cruise in Saint Clair Shores, Michigan.

Again, while the other cruises have too many cars in the left lane with people are watching from the other side of the right lane, Harper is right there with only four lanes of traffic with a center turn lane. Plus, on Harper, there is no boulevard separating east and west side. That makes for a more personalized experience for both car owners and fans.

And since traffic gets clogged up quite often, the cars are going pretty slow, except for the occasional runaway; again allowing the crowd to get closer to the cars.

What’s best, though, is that people on the sidewalks can walk right up and look inside the cars, they can even talk to the owners like I did at the K-Mart lot on the southwest corner of Harper and 9 Mile Road.

More about the cars in video

Again, I am taking far more video this year than ever, and with good reason. You get the sights and the sounds of what I actually see and hear. Hope you like it. Let me know how you feel on the comment area below the article.

And as I wrote in Parts 1 and 2, I think it’s time the rest of America realized just how great this cruise scene on Harper Avenue is, and a national revelation by Torque News is indeed fitting.

What’s next? A C5 Corvette with ‘53 Vette body panels. So, stay tuned to Torque News.