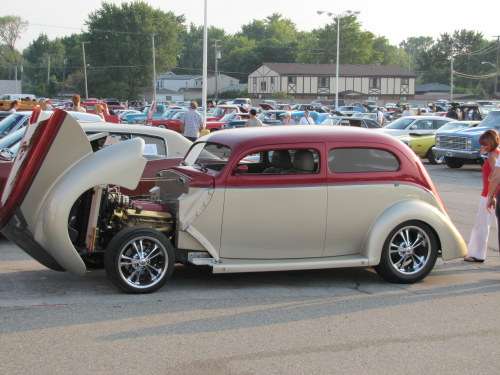 Kiwanis of Saint Clair Shores on the east side of Macomb County, Michigan put on another successful Harper Charity Cruise for 2011, complete with hot rods, restored cars and a friendly crowd of auto enthusiasts with a personal touch beyond other cruises.
Advertisement

This year the annual event, labeled as the Kiwanis Harper Charity Cruise, lived up to my expectations as being the most quaint and favored of all the summer car cruise events on the east side of metro-Detroit.

As much as I like the Gratiot Cruise and the Woodward Dream Cruise, their cruisers are too often in the left lane and people are watching from the other side of the right lane. At Harper, there is no boulevard separating east and west side. Harper is right there with only four lanes of traffic with a center turn lane. And since traffic gets clogged up quite often, the cars are going pretty slow, except for the occasional runaway. What’s best, though, is that people on the sidewalks can walk right up and look inside the cars, they can even talk to the owners. I say it’s quaint; others say it’s a “personalized cruise. All are right.

Last year, Shorewood Kiwanis and other participating organizations raised over $27,000 after expenses to give to charity. Although the bulk largely came from generous support of local businesses, Kiwanis volunteers intended this year to go from car to car all day selling t-shirts and bumper stickers to raise funds as well. My Judi bought two shirts while I was busy taking pictures.

According to Cruise Committee Chairman, Jack Cascione, “The purpose of the cruise is (to help) children's charities. Kiwanis doesn't make any money off this—all proceeds are given to the charities.”

More about the cars

Special thanks to my friends, Jackie and Ray Talley for sharing their motor home location, a place to sit down, grab a bite to eat and act as ground zero for all my photos and videos. Ray even allowed me to go on top of the motor home for some cool photo and video shots. Truth is, I found it easier going up than coming down; must be my age.

For the record, this is not my first coverage of this cruise event. In the past, I have covered the Harper Charity Cruise as the Detroit Automotive Technology Examiner, as it was primarily a great local story. Well, I think it’s time the rest of America realized just how great this cruise scene on Harper Avenue is, and a national revelation by Torque News is indeed fitting.

This time I opted to include one article with a slideshow of still photos, a second and possibly a third article covering the videos; and a special article or two for a few notable vehicles and owners.

So, here is the first set of photos:

And be sure to check back for more articles on the Kiwanis Harper Charity Cruise for 2011, and this time there will be videos!

D Dunalung wrote on September 2, 2011 - 11:23am Permalink
I would like to purchase one of those T-Shirts But, cannot find any info on it. I lve in Florida and could'nt make it..