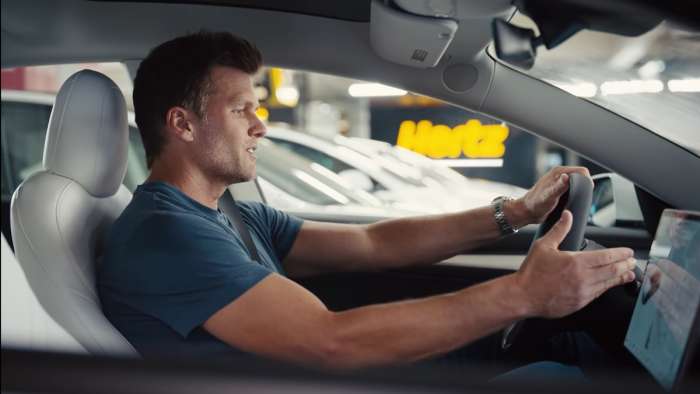 Tesla famously doesn't do paid advertisements or endorsements. However, as Tesla's brand power grows, increasingly companies are putting more effort to be associated with the EV maker. And one recent example is a Tesla Model 3 commercial featuring Tom Brady.
Advertisement

Tesla’s domination of the automotive market keeps growing. Once a struggling EV maker on the brink of bankruptcy, Tesla is now by far the biggest automaker by market cap. Not only that, the EV maker recently announced it has produced more than 840,000 vehicles in the past 4 quarters and plans to grow production capacity 50% every year for the foreseeable future.

Tesla is also building 2 new factories on 2 continents and is significantly expanding production capacity in another 2 factories. And even more impressive, Tesla is fueling all this growth from internally generated funds and recently posted the biggest profit in the company’s history.

The EV maker is also at the forefront of full self-driving development and recently released the next iteration of FSD Beta software to much acclaim. Although a hiccup where the vehicle reverses in the middle of a left turn forced Tesla to roll back the software.

And as Tesla’s domination of the automotive market continues, more and more people seem to be recognizing the EV maker’s value. A recent Model 3 commercial featuring Tom Brady is a good example showcasing this effect.

Tesla famously doesn’t do advertisements, as a result, it’s not often we see the company’s vehicles on major networks being endorsed by famous celebrities. According to Elon Musk, since Tesla can’t already produce enough vehicles to satisfy demand the EV maker doesn’t plan to do advertisements anytime soon.

However, as Tesla’s brand value grows, other companies are increasingly looking to be associated with the EV maker, and are starting to produce advertisements featuring Tesla vehicles.

Hertz, the largest vehicle rental company in the world announced it has purchased 100,000 Model 3s. And during the announcement, Hertz produced an advertisement featuring the legendary quarterback Tom Brady charging himself next to several Model 3s.

Related news: How Ensuring An Electric Car Differs From Other Vehicles

The advertisement begins with a Hertz employee saying “our new EV rental fleet is the absolute GOAT. Nice! Speaking of GOATS… Is that Tom Brady?” And we see Tom Brady plugged in into a Tesla charger and the Hertz employee continues saying “yeah. He comes in to recharge, get software updates.” linking features famous with Tesla vehicles with Tom Brady.

.@Tesla should partner with @Hertz for rental Teslas while your vehicle is in service! @elonmusk https://t.co/z7iXzthP3d

Elon Musk in the past has said he finds it deceptive paying celebrities to endorse his vehicles, however, if someone is calling Teslas the Greatest Of All Time, I think Musk will be fine accepting the compliment.

Elon Musk thinks in the long run there is a possibility Tesla might do advertisements, however, Musk says the advertisements will be more informative than an endorsement. We will be sure to keep you posted if Tesla produces the company’s first advertisement. Make sure to follow our site torquenews.com/Tesla regularly for the latest updates.

So what do you think? Excited to see Tom Brady and Tesla together? Also, do you think Tesla should begin advertising? Let me know your thoughts down in the comments below.

LG's New EV Battery Plant Is a Welcome News for Tesla
Tesla Giga Berlin's New Hurdle: It's Not Only the Gov't, but Now Tesla Itself
END_OF_DOCUMENT_TOKEN_TO_BE_REPLACED