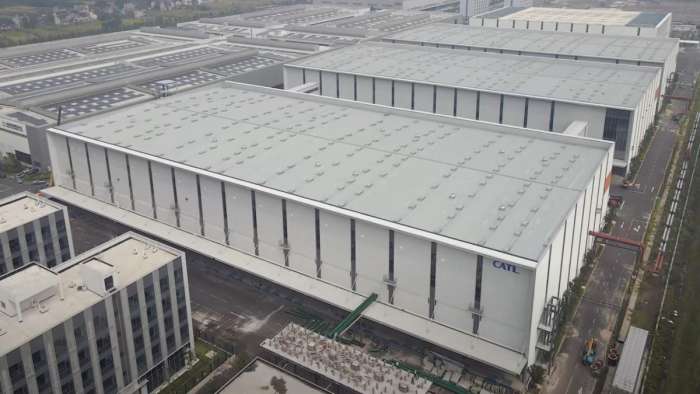 We have a video and news that the giant battery factory from CATL, that is just 3 km from Tesla's Giga Shanghai factory will be completed very soon. This is great news and let's see what's going on here.
Advertisement

There is a video here of CATL's almost completed battery factory which is just 3 km from Giga Shanghai. This is great to see! We wrote about this giant battery factory being built 4 months ago and the progress has been very fast.

This battery factory form CATL is being built in Shanghai Lingang and is almost done. Various sources say that the factory will be done in 2 days (10/25/2021) and that CATL will also have a roll-out ceremony which will be held internally. This is a big win for CATL and Tesla because of the close distance between the two factories.

Battery Deals With Tesla and Other Companies

The lithium iron phosphate as the cathode material of lithium-ion batteries has the advantage of a high operating voltage, high energy density, a long life cycle, good safety and performance, a small self-discharge rate, and many other benefits.

There was previous rumor that CATL would build a new large automotive power plant project in Shanghai, China, and that the new plant would have an annual capacity of 80 GWh. This was being interpreted by industry insiders as CATL being closer to Tesla's production base in Shanghai, China.

Another theory is that CATL is building a plant in Shanghai not just for Tesla, but also for Western Energy vehicles such as NIO, Xpeng, and RISO. We'll have to wait and see what deals get announced, if any, between those auto makers.

CATL is on the Right Track

If you look at CATL (Contemporary Amperex Technology Co. Ltd.), you can see strong growth in its stock since its debut on June 15, 2018. From that time, the stock has gone from 53.0 yuan to 601.40 yuan, a 12 times return on investment made and I believe there's going to be continued high growth for this company until electric vehicles reach saturation.

In fact, I wouldn't be surprised to see CATL build another battery factory in Europe and the United States. Let's wait and see what happens!

What do you think about CATL being done with their battery factory near Giga Shanghai? Is this good for Tesla and CATl? Will other auto makers benefit from this, such as NIO?

mujammojam wrote on October 24, 2021 - 11:45am Permalink
I think BYD is going to give CATL run for its money. CATL is getting in the joint venture in Europe with BASF. BYD has already a foot in the door in the US market with one plant in California, however it is more geared towards Energy Storage. Having said that and tipping our hats to CATL for being the 600 pound gorilla in the room, BYD is ahead in LFP markets. CATL appears little nervous and apprehensive of becoming the second cheese if BYD pulls ahead in the US market.

LG's New EV Battery Plant Is a Welcome News for Tesla
Tesla Giga Berlin's New Hurdle: It's Not Only the Gov't, but Now Tesla Itself
END_OF_DOCUMENT_TOKEN_TO_BE_REPLACED