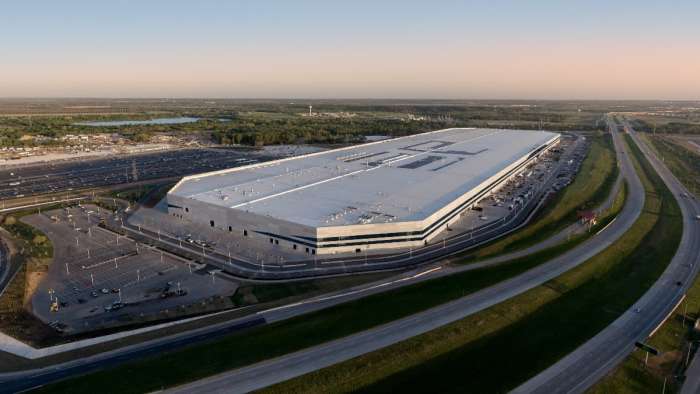 According to leaks citing Tesla cell engineers, today the EV maker has started 4680 battery production at Giga Texas. This is expected to alleviate Tesla's cell constraint and enable the EV maker to launch a Model Y with more than 400 miles of range.
Advertisement

A few weeks ago, Tesla inaugurated its Austin Texas factory with an epic party that the EV maker called, Cyber Rodeo. During the Cyber Rodeo event, Tesla made several exciting announcements.

Some of the things we learned at the Giga Texas event include, first, we got our first up-close look at the redesigned Cybertruck without door handles and several other notable changes. Second, Elon Musk revealed that Tesla is working on a new “futuristic” dedicated robotaxi that will begin production in 2024.

At the event, the EV maker also revealed Tesla’s FSD Beta program has grown to over 100,000 participants and that Tesla’s full self-driving software will finally be released to all Tesla owners in the US later this year.

And finally, Tesla at the Cyber Rodeo event also delivered the first Giga Texas-built Model Ys. The Giga Texas Model Y is the first Tesla vehicle to launch with the revolutionary 4680 cells and structural battery pack.

According to Tesla’s Battery Day presentation, the 4680 cells, together with a structural battery pack, increase the energy density of Tesla vehicles by as much as 54%. Given this information, in a previous article, we had estimated that when the refreshed Model Y eventually launches with the 4680 cells that it will have an EPA estimated range close to 475-miles.

However, to the disappointment of Tesla enthusiasts all around the world, the new Giga Texas built Model Y only came with a 279-mile EPA estimated range. This sent shockwaves around the EV community and even led some individuals to conclude Tesla’s 4680 cells and the Battery Day presentation were a lie.

However, soon after, Tesla gave an explanation as to why the new Model Y, even though it has the 4680 cells and a structural battery pack only has a 279-mile range. And according to the memo sent to Tesla employees, the 4680 Model Y has such a limited range because Tesla chose to put a smaller battery pack in the new vehicle.

Given the size of the Model Y, Tesla could have easily designed a much larger 4680 battery pack that gives the refreshed Model Y more than 400 miles of range. However, Tesla is currently struggling to produce the 4680 cells at scale.

Some insider leaks have even suggested that, despite the new battery being in production at Tesla’s Kato Road facility for over a year, so far, the EV maker could only produce enough cells to power a couple of thousand Model Ys.

And if the 4680 cells are in such a limited supply, it makes sense why Tesla chose to design a small 4680 battery pack for the refreshed Model Y. This strategy allows Tesla to maximize vehicle output while putting a cap on cell requirements.

In the short term, this approach will give Tesla some breathing room. However, at the Cyber Rodeo event, Elon Musk said starting in 2022 Tesla plans to grow production by “insane levels”, and in order to achieve this goal, Tesla will soon need to scale 4680 cell production.

And today, Tesla has taken an important first step towards achieving this lofty goal. According to information shared with Tesla enthusiast WholeMarsCatalog, for the first time, the EV maker on May 6 started building 4680 batteries at Giga Texas.

Related News: How Do the Best Selling EVs Compare To Tesla?

The information shared with WholeMarsCatalog comes from a source who claims to have received this leak directly from a cell engineering employee at Tesla. Admittedly, this is only one anonymous source however, Elon Musk has said Giga Texas will reach 100GWh battery production capacity by next year.

4680 cells coming off the line at Giga Texas today (maybe)

volume production by the end of Q3 pic.twitter.com/r5EscmA6eA

And if by 2023, Tesla plans to make Giga Texas the largest battery manufacturing facility in the world, it makes sense that the EV maker would begin 4680 production at the factory sooner than later.

Tesla starting 4680 cell production at Giga Texas is exciting on its own, however, if the EV maker is able to quickly scale battery production then, there is a chance in the near future, Tesla will launch a Model Y with more than 400 miles of range.

There are a couple of reasons I think a 400-plus mile range Model Y is in the cards. First, one of the main limitations that forced Tesla to build a 4680 Model Y with only 279 miles of range is battery constraint.

And now that 4680 cell production has begun at Giga Texas, and assuming Tesla is able to scale production with high yield, then the EV maker will no longer have any reason to put its most energy-dense batteries towards its lowest range vehicle.

Second, since the launch of the Lucid Air, Tesla has lost its number one position as the company that produces the longest range EVs; And not even by a small margin.

Currently, the longest-range vehicle Tesla produces is the Dual Motor All-Wheel Drive Model S which can travel 375 miles between charges. In comparison, the Lucid Air has a 520 miles EPA estimated range.

NEWS! - Reuters has reviewed an internal memo from #Tesla #GigaShanghai revealing when Tesla will return to pre-lockdown production level. The deadline is soon. See https://t.co/ClEA5sbicS pic.twitter.com/qPOt0FhTIJ

This gives Lucid a 145-mile range advantage over Tesla. 145 miles is a huge margin for Tesla to be behind and it seems unlikely the Austin Texas EV maker will let Lucid be the undisputed range champion for long.

And if Tesla decides to challenge Lucid, given that the EV maker has chosen the Model Y to be the first Tesla to get the 4680 cells and structural battery pack, a 400 plus mile Model Y seems like the first logical step to close the gap.

As of now, this is only my educated guess, however, we will be sure to keep you posted as we get more information about Tesla’s product roadmap and 4680 production. Until then, make sure to visit our site torquenews.com/Tesla regularly for the latest updates?

So what do you think? Excited Tesla has started 4680 cell production at Giga Texas? Also, what do you think about Tesla launching a 400-plus miles range Model Y? Let me know your thoughts in the comments below.

For more information check out: How Much Does Your Electric Bill Go Up With a Tesla Model Y?