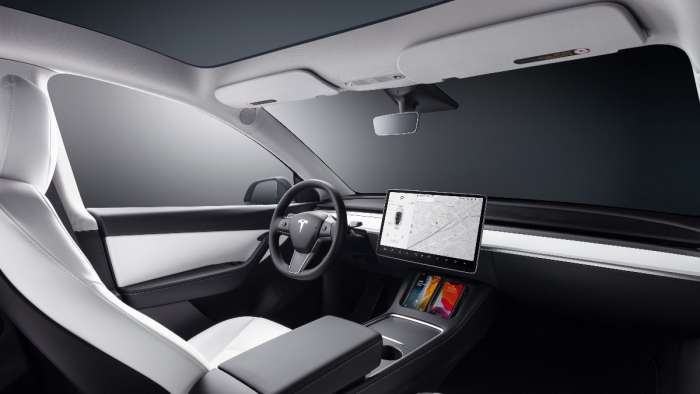 One distinguishing feature of the Tesla Model 3 & Y is that the vehicles only come with a single screen for the entire vehicle. However, this might be about to change after a teardown of the vehicles' MCU revealed a currently not in use connector dubbed "2nd display".
Advertisement

When Tesla unveiled the Model 3 back in 2016, the biggest controversy regarding the vehicle was that it lacked a second screen behind the steering wheel which is also called an instrument cluster.

The Model 3 did away with the instrument cluster and moved information like speed and autopilot information to the main 15-inch touch screen in the center of the vehicle. And, once Tesla announced the Model Y, the EV maker continued with this interior layout.

Since then, there have been sporadic reports of Tesla adding a heads-up display to the 2 vehicles. However, Elon Musk has shot down those rumors multiple times until the broader Tesla community accepted the vehicles will only have a single screen for the foreseeable future.

Related News: Tesla Explains Why The Refreshed Model Y Only Has A 279 Mile Range Despite 4680 Cells & Structural Pack

At least that is until now. According to @greentheonly who is a white hat Tesla hacker famous for predicting Tesla’s moves, the EV maker is apparently looking to add a second screen to the Model 3 & Y.

Green as he is known on Twitter, came to this conclusion after examining an AMD-based model 3 & Y media control unit. During his inspection, Green noticed a currently not in use connector in the MCU marked as “2nd display”.

Looks like model 3/Y is getting a second display soon?
I just took a closer look at an AMD based model 3/y car thanks to some enterprising people
And there are two unpopulated connectors near display, one of them is marked "2nd display".
EPC has it populated - looks like s/x pic.twitter.com/99ESydFShV

The first thing that comes to mind is maybe Tesla added this open port not to specifically add a second connector to the Model 3 & Y but, rather is simply using parts from Model S & X which currently come with multiple screen connectors.

However, Green has also examined the MCUs of the Model S & X and he says that they are significantly different than the Model 3 & Y’s MCUs. This means Tesla has intentionally added the connector dubbed 2nd display on Model 3 & Y.

As for when this second display might be coming, Green says he doesn’t have an exact date but, has given an example of how a “similar story played out with original ModelY with unpopulated USB3 that then got populated in a later revision.”

Similar story played with original ModelY with unpopulated USB3 that then got populated in later revision.

Also retrofit for intel cars definitely looks impossible - totally different power and other harness and thickness of the unit.

This is certainly exciting and will undoubtedly make a lot of people happy. Although, the usual questions of a retrofit are likely to come up. As for a retrofit, Green says that will be impossible especially for Tesla vehicles with an Intel-built MCU, as the latter has a “totally different power and other harness and thickness of the unit.”

As of now, it is difficult to say when exactly Tesla is planning to add a second display to the Model 3 & Y. However, we will be sure to keep you posted as we learn more about the situation. Until then, make sure to visit our site torquenews.com/Tesla regularly for the latest updates.

So what do you think? Excited that Tesla might add a second screen to the Model 3 & Y? Would a second screen make the vehicles more attractive to you? Let me know your thoughts in the comments below.

For more information check out: Tesla Updates Leasing Conditions In The US: Will No Longer Allow Purchase At End Of Contracts

Tesla Contemplates A New Strategy for China Retail even As Sales Boom
Jay Leno on Elon Musk & EVs: “I Think He Should Get ... Credit"
END_OF_DOCUMENT_TOKEN_TO_BE_REPLACED