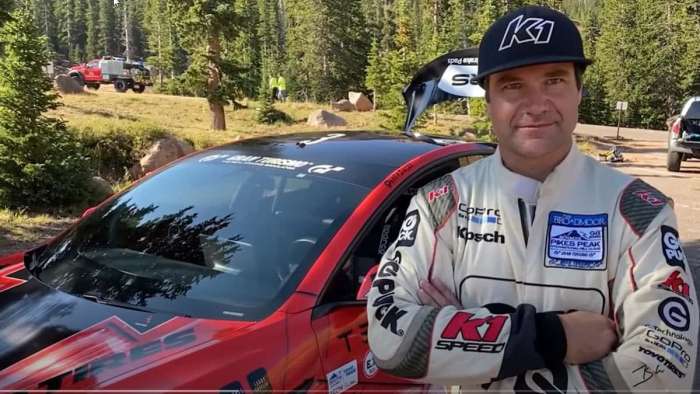 Two Tesla Model 3s Win Their Class In Race To The Clouds!

In this article I explain how the top 2 competitors in the Pikes Peak Challenge make their way to the race day with Tesla Model 3 and how they won their class and set several records, but not without several surprises that I didn't expect.
Advertisement

This week I’ve been following the drama of the Pikes Peak Race to the Cloud that happened on Sunday, August 30. I started reading articles about Unplugged Performance testing some modifications to the suspension and body that reduce drag, increase downforce, and improve handling which turns the already fast and great handling Tesla Model 3 performance into a monster on the track. Think I’m exaggerating? This car, which was built for less than $100,000, beats the million-dollar Mclaren F1 and the $200,000 Porsche 911 GT3 RS around the track.

We have written about Unplugged Performance about a year ago when they were again working with Randy Pobst and Tesla to develop the Version 2 Track mode.

In addition to modifying the car, unplugged got Randy Pobst (4 time SCCA World Challenge GT Champion) to drive their car up Pikes Peak.

Another competitor that was taking a different tack was Blake Fuller of the Electric Performance Racing Team. They took a slightly modified Model 3 performance that just had the interior stripped and roll bars installed, but no body or suspension enhancements. They have an experienced driver who has competed at Pikes Peak before in a Model S performance, but he doesn’t have the long list of wins that Randy has accumulated in his successful career. 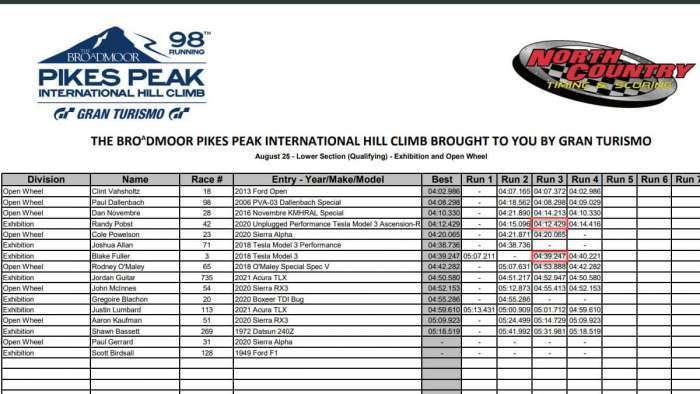 The first day at the course, everything went as planned. Randy had a great time on the lower part of the course and earned a number one seed in the Exhibition class with a 4:12 time. Blake beat out many more exotic open wheel cars and qualified with his time of 4:39. There were 2 more test days at the course.

Everything was going as planned. In the above video, Randy comments the car was “faultless” and how he doesn’t think he has “ever driven a better handling car” high praise from a driver as accomplished as Randy. When Randy took his first run on the top part of the course, he hit some heaves in a rough part of the road (the bottomless pit) too fast as he lays into the corner. He attempts to correct the slide but wasn’t able to recover and crashed into a wall at about 40 miles per hour. With this amount of damage, it was a long shot whether they would be able to race it on Sunday.

Unplugged Performance and Randy found a repair shop experienced in repairing Teslas and put together a team of people to work 42 hours straight repairing the car. They didn’t have time to order parts, so they found another Tesla Model 3 Performance “the donor car” and took the parts they needed off of that car to repair the unplugged performance car. Unplugged Performance did fly in some aftermarket parts too. After a huge amount of work, they pulled off the near-impossible and repaired the car to race-ready condition.

On race day, Blake has a great run and sets the Production EV Record with a Time of 11 minutes 2 seconds and also drove the first Tesla Model 3 to successfully complete the Pike Peak Challenge. At the time he finished the race, he didn’t know if Randy would beat him, but since the Unplugged Performance Team piloted by Randy had qualified with a time almost 30 seconds better than him, so he didn’t expect to win his class.

Everyone had high hopes that with all the work put into repairing the Unplugged Performance car and its flawless performance on short test runs that Randy would be able to put in a run under 10 minutes up the mountain. As the car accelerated off the line, everything looked good. But after a few minutes, it was apparent something was wrong with the thermal management of the battery since the car battery was showing red and only producing about half the power it had before the crash. Randy did a great job making the best of the situation, not only finishing the race but coming within 2 seconds of Blake Fuller’s time achieved with an undamaged car.

It wasn’t the result I expected, but it was an exciting story that kept me interested as I followed the action all week.

Speaking of the Model 3, also see Tesla may build a new Model 2 affordable hatchback, based on the Model 3.

Other Exciting Tesla Articles to check out: