Originally scheduled to happen earlier this year, battery and Investor day 2020 will occur next month on September 22nd in Fremont, next to Tesla's Gigafactory. Many speculations have been made as to what may be revealed during the event, and now with the date less than a month away, a few things have been discovered that could hint at what will be revealed.
Advertisement

Last year, Tesla acquired Maxwell technologies, a company working on creating dry electrode batteries and supercapacitors. Interest in super capacitors is somewhat limited for Tesla because although they can discharge very large amounts of energy rapidly, they are unable to hold a lot of it. They remain a potential candidate for the new Roadster which could use them for fast acceleration. But dry electrode batteries could be revolutionary for Tesla and on the battery market because they have the ability to be a lot more energy dense than traditional lithium Ion batteries.

Tesla has always wanted to go under the 100$/ kWh production price and this technology might just do it. The electric car maker works with the Chinese battery manufacturing giant CATL, specializing in lithium ion battery production and hopes to achieve this goal.

It is looking increasingly possible that an early stage battery production line will be revealed in September at the Cato Road facility called Roadrunner Project, marking the start of Tesla building their own cells in-house, which will mean that they will be significantly cheaper to them than having them made by a supplier.

It is likely that this Battery Day will mark in a more pronounced way than before that Tesla are an energy company not just an automaker, because they will use batteries in their large scale energy storage solutions: Powerwall, Megapack and Gigapack.

Another bit of news we could be notified about is recycling, with more and more electric vehicles on the road, in a few years a lot of battery packs will be approaching the end of their lives use. Luckily Tesla might have a solution in the works, with JB Straubel, an old time co-founder of the company, having created a recycling company a few years ago. We could learn more about this as it is likely that the two companies are in contact and are working together.

One other interesting speculation that has been made is in relation to the picture posted on the Tesla's website, on which potential attendees can try to obtain an invitation to the Tesla Battery Day event. It depicts, if you look closely, a structure that is akin to silicon nanowires.

After isolating the image from the text on Tesla's website and changing the contrast of the image, we got a clearer look. And here is what we saw: a nanowire technology. Is Tesla hinting at batteries with higher performance though it has yet to be commercialized. 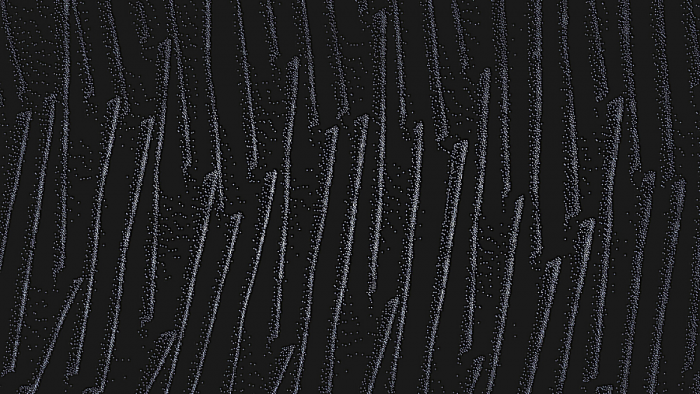 What are silicon nanowires? They are a method of making batteries more energy dense by increasing the surface area of the battery's electrode. This works with the help of the material properties of silicon:used as an anode it has a high theoretical charge capacity compared to graphite that is currently used. Second, the nanowires are what increase the surface area in contact with the electrolyte ( the usually liquid substrate between the two electrodes that Maxwell are trying to make solid).With an increased area of contact, the batteries would be able to charge at faster speeds,deliver more current and hold more energy. In fact, nanowire battery technology is one of the 5 battery technologies influencing Toyota Prius hybrid and electric vehicles.

Even if silicon holds many advantages, there is an important hurdle to overcome: Silicon swells by 400% as it intercalates lithium during charging, severely damaging the material. Interestingly, the nanowires of Amprius tolerate volume expansion and have micro and macro porosity that accommodate swell.

The main pioneering company in silicon nanowire battery development is called Amprius. Although no official partnership has been announced between them and Tesla, last year Tesla hired an engineering and manufacturing leader. Furthermore the company is also based in Fremont, right next to the Tesla site. To also quote the Amprius website "Our high performance lithium-ion batteries containing 100% silicon nanowire anodes are currently being used in premium and mission critical applications and are expected to expand to EV and consumer applications in the near future." So a lot of clues point towards them being or becoming a business partner with Tesla.

In my opinion one of three situations can happen instead :either Tesla will announce that they have bought Amprius and will be implementing their technology to their cars, the second scenario is them announcing they have independently developed their own silicon nanowires with the help of the companies they acquired in the last few years, my third thought is that this speculation is entirely wrong and instead they have improved on their current lithium ion battery through Maxwell.

Whatever happens we can be sure to be in for an announcement that will massively change the way Tesla is viewed, range anxiety will be likely to disappear altogether and charging times could be significantly reduced, hoisting demand for Tesla's energy storage solutions and vehicles to record numbers.

What are your thoughts? Please, let's discuss in the comments. These battery advancements should make Tesla be able to finally make everyman's car just like Ford did decades ago.

Also, please see my latest Tesla story discussing how the Cybertruck will impact the world true its versatility.