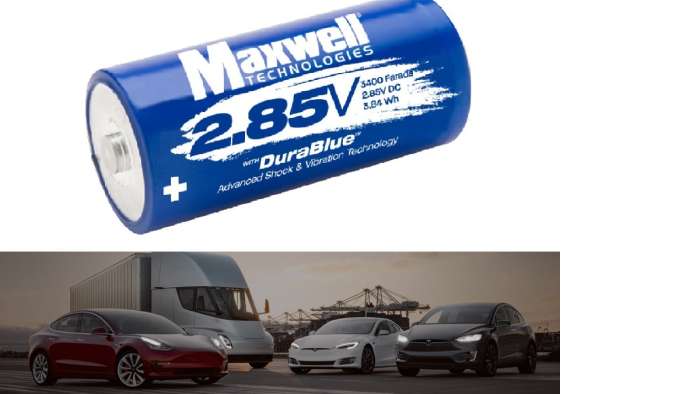 Tesla Semi and pickup truck will greatly benefit from Tesla's Maxwell battery production, but the quickest profit that Tesla could derive from the new batteries would be in the Model 3, Model Y and Model F(?) pickup truck. Here is why.
Advertisement

The sooner that Tesla can employ the new Maxwell dry electrode process in their battery production, the better, as long as there are no surprises in the manufacturing process and adapting them to Tesla's vehicle drivetrain and platforms.

The questions that I wonder about today is whether Tesla plans to jump right into hybrid battery packs or not.

Hybrid battery packs would utilize both Maxwell's ultra capacitors combined with their new Lithium batteries. This design would provide a power buffer for quicker charging, and also for other fast charge/discharge uses like regeneration braking and quick acceleration. Or if they will release just the new batteries first, and add the ultra capacitors in later models to avoid R&D delays that may arise from adding two new energy systems in one design.

Watch Tesla Semi backing up for charging and click to subscribe to Torque News Youtube channel for daily videos on Tesla and Automotive industry news analysis.

The immediate benefits of ultra capacitors are obvious for the Tesla Semi use because of their heavy loads, and the additional heavy demands for acceleration and braking.

Also relating to the new battery production time frame, there are the considerations of Tesla-Panasonic's battery production facilities and adaptation to Maxwell's solvent free manufacturing process to create their dry electrode batteries.

Maxwell has been working on the dry electrode batteries since 2011, so the solvent free process is well developed and dry electrode batteries have proved to be reliable already. But their previous production batteries were a pouch design like those used in the Chevy Volt/Bolt (LG) and Leaf battery packs. Also, there are different manufacturing issues with the thicker electrodes in a cylindrical cell case (which Tesla uses now) that may require the new Tesla batteries to be in a larger case.

Tesla's new battery design would still have the advantages of higher energy density, longer life, no cobalt needed, and significantly lower production/manufacturing cost, but the larger batteries may not be a direct plug-in for existing manufacturing facilities, or the current vehicle battery trays, cooling and battery management systems (BMS).

Advantages of Maxwell Battery for Tesla

Still, the advantages of the new Maxwell battery technologies could give Tesla a huge advantage in the auto industry just by simply lowering the battery production time and costs alone. And the less expensive, but much better batteries will help across Tesla's whole product line, from their Semis to their Powerwalls.

However, the quickest profit that Tesla could derive from the new batteries would be in the Model 3, Model Y and Model F(?) pickup because faster and cheaper production costs will pay off soonest from the highest volume vehicles. The Tesla Roadster, Semi, and Power walls get good press, but they will take more time to return a profit.

Watch what appears to be a driverless Tesla Semi and click to Subscribe to Torque News Youtube channel for daily Tesla and Automotive industry news coverage.

See you in my next story where I am discussing what GM's smart move will be about the Cadillace Escalade BEV.