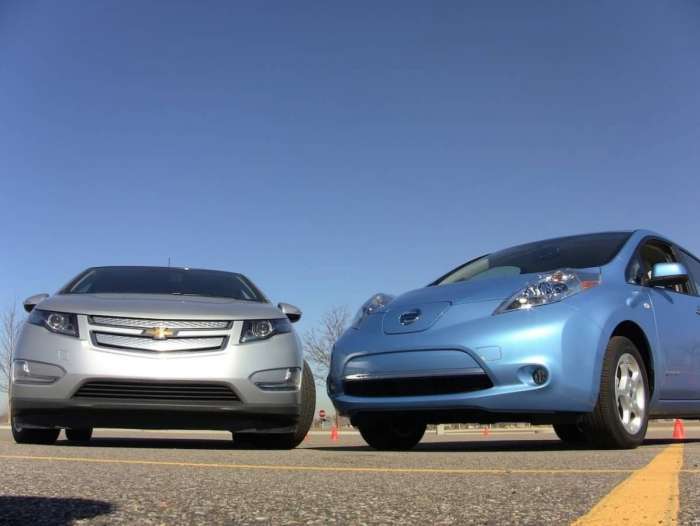 Chevrolet and Nissan use two different systems to cool their electric cars' batteries. Chevy is using the liquid to cool its batteries in Chevy Volts and Chevy Bolts, whereas Nissan is using the air cooling method to cool Leaf's battery. They both have pros and cons.
Advertisement

Pros and Cons of The 2 Battery Cooling Systems

This issue came to the fore of public discussion after BBC reported that Nissan Leaf owners claim charging times and range are misleading.

"My 2012 Volt (see Torque News 2013 Volt review) did not have any measurable battery capacity loss and my 2015 E-Golf with an air cooled battery is still providing the same range when it was new. I have never used the fast DC capability of the E-Golf. Granted the Leaf may have battery thermal issues, I am not willing to reject air cooling technology. We need to consider thermal management parameters, battery chemistry options and operating conditions," writes one Volt owner, named Douglas in GM Electric Vehicle Owners Group on Facebook.

Some other members in that group say that Nissan did a lousy job with their first models. People may now be afraid to buy a Leaf now unless Nissan quickly finds a way to address the battery cooling issue not only for the upcoming Nissan Leaf models, but also for the existing models giving the owners some incentives.

Ivan Jue, a Leaf owner and a former Torque News contributor writes "It’s really too bad, because our 2011 Nisan Leaf was actually a pretty decent, reliable car. Family liked it, and it had good interior room (and could sit 5). If the battery held up, we would have kept it. But losing 20% capacity in 30 months and no news of any remedy from Nissan (at the time) forced us to sell it. Good thing we did, as resale really tanked once news came out about the battery."

Nissan Leaf is a good car, but I want to give a ton of respect to GM engineers that worked on the Volt's and Bolt's batteries.

In defense of Nissan Leaf, I want to say that a LEAF could still be a good buy and do alright (especially if just a lease), and if some basic principles are followed when charging, driving, and parking it. There are some tips in this video near the end (from 3:58). Keep an eye on your battery temperature.

Here is what to look for when buying a used Nissan Leaf. If you want to buy a Nissan Leaf or Chevy Bolt/Volt check out how the battery of each vehicle is cooled.

Although both Chevy and Nissan have two different battery cooling systems for their Bolt, Volt and Leaf EVs, you still have to make your own decisions based on your budget, needs and driving habits.

Which of these two battery cooling systems do you prefer? Please, share your thoughts in the comment's section below for discussion.

Andy wrote on July 7, 2018 - 8:44am Permalink
During the heatwave in Ontario last week I noticed my battery temp gauge was always halfway up even when my car was just sitting, not charging or being driven for the day...
Chris wrote on July 7, 2018 - 8:44am Permalink
At the end of the day I plan on keeping our Leaf for 8-10 years. By then it will have paid for itself and then some. We only trickle charge and will rarely take it on a trip that requires multiple changes. If we had to quick change on a regular basis I might be concerned but the way we use the car I’m not sweating it.
Tom wrote on July 7, 2018 - 2:46pm Permalink
Having a seven year old LEAF, with only 60,000KMs on it, and its maximum range is around 60km on a full charge, I can assure you that its lack of any cooling system (suggesting it is air cooled with out a cooling fan, heat sinks or such is highly misleading) is of serious detriment, especially in areas that have hot summertime temperatures. (3 capacity bars already gone, 4th expected to go bye-bye any time now.)
Dean McManis wrote on July 7, 2018 - 6:40pm Permalink
It seems obvious to me that battery pack cooling and heating extends the life of Lithium batteries. The question left is whether it is a deal killer for you as an electric car buyer . Nissan is also adding liquid cooling to their upcoming EVs, so they also see the value. But they were probably looking for a design that would save cost, but it has affected the resale value for the Leaf.
Harvey Payne wrote on July 7, 2018 - 9:17pm Permalink
This brief article, if you can call it that, seems mainly to be an apology piece for Nissan's suck battery. I don't see a real comparison here. More of a "well, yes the Nissan air cooled battery sucks, but if you don't mind that it is a decent car -- so long as you get rid of it in 30 months so you don't have to suffer the degradation." I'll wait and see if the 60 kWh battery Nissan LEAF has actual battery thermal management to decide if I want one to replace our Bolt when the time comes.
VFanRJ wrote on July 8, 2018 - 5:05pm Permalink
It's clear that the author couldn't go beyond a 30 second explanation of either system.
Brent wrote on July 8, 2018 - 7:16am Permalink
I find it interesting that both systems have pros and cons. There is no con in the Volt. The cooling system doesn't add enough weight to be an issue. My Volt has 130,000 miles and zero battery loss. Zero! There is no comparison. The extra weight in my car lets me drive as far as I want. At least 50 trips of 500 to 1000 miles. Let's see a Leaf do that. What a joke.
Jim Heidmann wrote on July 12, 2019 - 12:55pm Permalink
First comment we live in Phx az. so leaf's r not the car to buy here .My son is on his second leaf (purchased used for about $8000) It had only 30,000 miles.but now is at 60,000. The Leaf range has dropped to 60-70 miles. He now babies the leaf - never fast charges, never lets battery get below 20% or over 80%.unless he knows a longer drive is needed. He typically lets it sit at around 50-60%during the week.. It dropped to 80% range not too long after he purchased but has not lost any further range probably due to how he cares for battery. He also owns a Fiat e (also purchased for about $8000)that is driven 102 miles daily (round trip) to work. It is also charged at work as its range has dropped to 80 miles. He charges at level 1 until 2pm then switches to level 2 to get to a full charge by 5 pm. So the Fiat does not sit with a full charge for more than a few minutes. In the evening he uses a similar approach to get Fiat to about an 80% charge. So Again Fiat does not sit with a full charge After seeing my son's experience with the Leaf's, I purchased a 2015 chevy Volt Oct of 2015,\. Love it, have 34000 miles and absolutely no battery problems.Had a computer fix as got message car not charging check high voltage charging system. Was fixed at no charge by chevy. I also charge the Volt starting 11pm at level 2 as we participate in the e car rate plan with lower rates at that 11pm-5am time frame Has been an eye opening experience Comparing the leaf/Fiat to the Volt. .