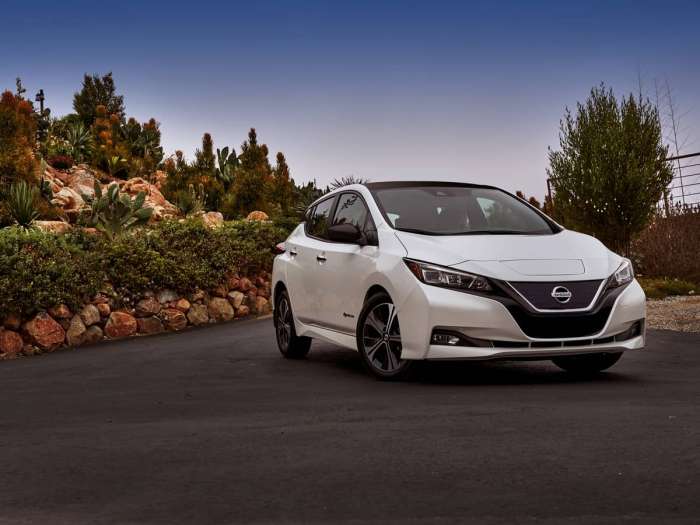 Nissan Leaf Owners: Beware of a Required Third Charge and if so, Call Nissan!

Nissan Leaf owners in the UK are expressing their dissatisfaction with the actual verses the reported range of their BEVs. Some are reporting problems requiring the car to need a third rapid charge during the course of the day. Many feel that they’ve been mislead to request some kind of compensation, prospective buyers have canceled their sales contracts. Could the charging problem be happening also in the US?
Advertisement

At the heart of the issue is what is the gasoline mileage equivalent or e-mpg, or BEV battery range in miles for the UK Nissan Leaf and why are some owners having problems charging the car? And what rating standards should apply so that the estimate is as closely accurate to the actual, and not the one presently advertised by Nissan, as some Leaf owners are saying, that they consider is deceitful.

Nissan owners across the UK are angrily dissatisfied with the performance of their new Nissan Leafs. Some complain of either long charging times at rapid charger stations or the disappointingly shorter range they’ve been getting in their cars lately. The BBC recently published an expose on the Leaf issue, and CarBuzz.com is reporting that the UK’s Advertising Standards Authority is currently deciding whether or not to launch an investigation.

About the Nissan Leaf

The Nissan Leaf was revolutionary when it was introduced a few years ago to the UK as Nissan’s first full production all-electric BEV. Other than Tesla, no car manufacturer among the legacy groups had such a car. When debuted its battery range was much shorter than the current year’s Nissan Leaf at EPA rated 150 miles, which was considered by some an improvement, there not good enough.

This newer Leaf model is the second generation, and Nissan has so far sold about 2600 units of these cars in the UK. But the customer’s complaining continues to grow as they seek redress for a problem that grows complicated on a trip longer than 250 miles.

There are three issues involved in the UK Leaf matter:

1. The discrepancy of the rapid charge time. CarBuzz: “Nissan ads claimed rapid charging would only require 40 minutes “in moderate driving conditions” for an 80 percent charge. However, that was later changed to between 40 and 60 minutes.”

2. What is the actual range of the Leaf, and says who? From anywhere from 150 miles to 235 miles, Nissan is using different standards and measures from various European sources to rate the BEV range. The apparent universally recognized standard and the one car reviewers use to compare is the US Environmental Protection Agency (EPA) e-mpg ratings, and they rated the second generation Leaf with a range up to 150 miles on a full charge. Worldwide Harmonized Light vehicle Test Procedure (WLTP) reports a 168-mile range.

Regardless of the ratings, that’s not the case, and if not worded carefully could be perceived as deceitful.

The problem is that some cars are requiring the third charge, most done at a public rapid charging station, and that charge is taking way longer than usual. The car seems to be drip charging to the owners’ annoyance. CarBuzz: “It should be noted that owners are not having issues with the first two charges – one at home and another en route.” Owners should be careful on trips over 250 miles.

I strongly suggest all UK Leaf owners get in contact with their UK dealer to resolve this issue. If I were a UK Leaf owner I’d give myself a little more emergency range cushion until this matter is resolved, and not let the range gauge go further than half way. I’d also reconsider trips over 250 miles unless absolutely necessary. I’d also avoid the third charge unless absolutely necessary, and only at home, not at a public rapid charging station.

For owners elsewhere worldwide including North America, I would monitor this situation for further developments to see if what’s happening to our British cousins, may also be occurring to our Leafs as well.

How about your Leaf? Is charging taking unusually long? Have you been stranded? What’s your take on the UK Leaf crisis? Let us know in the comments section.

David wrote on July 5, 2018 - 2:35pm Permalink
I reported on the fast charge issues back in February
Al Castro wrote on July 5, 2018 - 3:05pm Permalink
Hi David: Thanks for your comment were dying to know what happened! Let us know! Thanks. Al
Island_Steve wrote on July 5, 2018 - 3:03pm Permalink
The complaints being reported about Leaf range and mileage results indicate there are some new EV owners who did not do their proper research before choosing a Leaf. I’m a Leaf owner in the U.S. and our biggest knowledge gap here is EV purchasers who do not understand how to match their EV requirements with the correct EV model. If you plan on driving long distances in your EV then you should understand an EV without a thermal mgmt system is not the correct choice for you. In a temperate climate zone like the Pacific NW the current Leaf is an ideal EV for commuting and weekend short trips, but don’t think it compares with a Tesla with TMS and long range capability. Do your homework next time - sorry!
Wolfy wrote on July 12, 2019 - 2:00pm Permalink
I disagree. Nissan is touting the extended range Leaf as direct competition to the Bolt, Kona, etc.. I'm highly interested in the Leaf because it looks damn good. I know that they chose (wrongly) to keep the damned air cooling. Fact of the matter is that I'm one that needs this range. Yes, most of my driving is a short commute. Still, there are things called days off when that distance expands substantially, or work requires me to deviate from my normal commute. These are the times when I seriously want that extra range, along with the ability to occasionally take it beyond the tether of distance divided by two and subtract to keep a $35k plus car near the house due to range limits. Leaving the car at home on the days when I REALLY want it to offset my gasoline consumption, defeats its purpose.
Al Castro wrote on July 5, 2018 - 3:10pm Permalink
Steve I love it when you Leaf or Tesla owners rise to the occasion and take a stand! Thanks for this. This is a big problem I’m having with Tesla owners and AutoPilot in the Facebook groups: nobody reads the owners manual. We got away with that for years with gas cars, I don’t think we can do that with these electric cars. Thanks!
Johnty wrote on July 6, 2018 - 12:23pm Permalink
None of this is really news. 1 and 3 is basically the same and has been know for a while now: Rapidgate is something that will probably haunt Nissan for a while. It’s only an issue if you have to drive long trips, and for a lot of use cases it’s not an issue. But it’s a serious flaw that they should have addressed instead of letting the consumers discover after the fact since for those needing consecutive fast charging this is a dealbreaker. 2. Is totally a waste of space to even talk about. NEDC is the most optimistic of all the ratings, and unless Nissan directly tried to put the NEDC ratings alongside a competitors EPA rating or similar to pretend its the same, this is a non-issue. Have you seen the NEDC ratings for the other cars for example? They are equally inflated.
Al Castro wrote on July 7, 2018 - 4:09am Permalink
Well if you agree with Steve above then yeah this isn’t really news, this is more about people not reading the instructions. But I strongly disagree with you about 1 and 3 being the same. If you’re not paying close attention as I first did to skim over the issues, then it may seem. 1 is about a misleading claim Nissan allegedly poorly addressed and 3 is about the charge dripping these cars are doing at charging stations, whoever fault that is. Both are different issues with the commonality they need to be addressed.