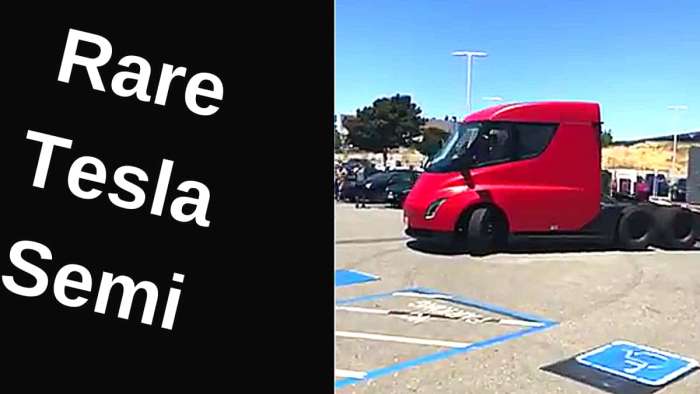 In a rare Tesla Semi spotting look how the Tesla Semi truck quietly rolls into a Supercharger and Service Center in Dublin, CA over the last weekend.
Advertisement

Tesla Semi made many people all of the sudden interested in semi trucks. The silence you hear, when the Tesla Semi backs up, is amazing. It feels like a celebrity walks into the restaurant you are dining at.

Even people, who don't love trucks, love the Semi. "I have never liked them. They are big, loud giants that stalk you on the roads. To see Tesla taking these giants and making them fully electric, having the autopilot tech combined really makes me feel safer. I’ve always felt a little intimidated when one passes me up whether I am in a friends car or on a bus or walking. And when walking, they make these loud diesel farts that you choke on," writes Johnna Crider in a story about Tesla Semi, published in Tesla Social.

The Tesla trucks is so huge and yet so quiet. It could really work in Mars. In fact, as the humans send more missions to Mars, the trucks that will work there, will probably be electric, like Tesla. As you know Tesla has already sent a roadster into the space.

I can't see the door edges. The exterior design is probably so smooth that it seems Tesla Semi doesn't have doors.

In April of 2019 Tesla said the Semi truck would have a maximum distance of 497 miles and be able to accelerate from 0 to 60 mph in 20 seconds with 40 tons. According to Tesla, the battery will charge in 30 minutes with enough electricity to last 397 miles. Tesla Semi will come with a price tag of about $180,000.

Note that these specs may still improve as we near the production and see it roll off the assembly line. For comparison new gas trucks begin at around $80,000 and run up to $150,000 or more.

See you in the next story titled: 3 Features That Earned Tesla Model 3 Top Safety Ratings.