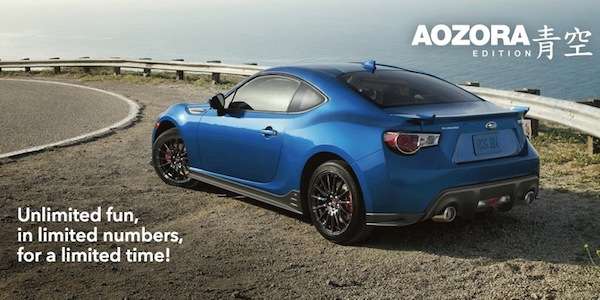 Why performance fans are disappointed in the 2015 Subaru BRZ

The U.S. market gets the 2015 Subaru BRZ Series.Blue, Canada gets the BRZ Sport-Tech Aozora Edition. Why are performance fans disappointed?
Advertisement

The 2015 Subaru BRZ has been introduced and it’s a sports car that was built for sheer driving pleasure. But why are BRZ fans disappointed in the 2015 model? Performance fans wanted the BRZ to be updated with a more powerful engine, but it still comes with the 2.0-liter naturally aspirated 200 horsepower boxer engine. BRZ fans are looking for turbocharged version of the the 2.0-liter engine with more power.

The U.S. market gets the 2015 Subaru BRZ Series.Blue, Canada gets the BRZ Sport-Tech Aozora Edition. But these cars are just BRZ models with STI trim and some minor upgrades to the body and suspension. These BRZ sports cars look good and will be fun to drive, but they still don’t meet performance buyers expectations.

When Subaru and Toyota first began to dream about collaborating in building a new rear-drive two-door sports coupe, the wanted an affordable car that would have a mantra of “sheer driving pleasure.” Subaru and Toyota accomplished this in a big way. The BRZ/GT86/FR-S are great drivers cars.

They first built a prototype which was based on a modified Legacy. The first prototype was built to prove the low center of gravity concept. The front driveshafts were removed and the engine placed as low and as far back as possible, both of which to ensure the weight was in exactly the right place.

Subaru later built more prototypes that were based on the previous Impreza and allowed the Subaru Engineering team to put BRZ to the test. The sports coupe went through months of grueling testing, because the engineering team strove to achieve perfection. The goal was to produce a sports car that offered “sheer driving pleasure.” They succeeded.

BRZ boasts the lowest center of gravity of any car on the planet and that is no coincidence. It represents the years of determination and single minded focus from the same team that introduced Impreza, WRX STI, Legacy, Outback, Forester and XV to the world.

We know Subaru is capable of producing a great sports car that is affordable and offers superior driving dynamics. The new special edition 2015 BRZ gets us closer, but Subaru BRZ fans would like to see Subaru take the next step and produce a turbocharged version with more horsepower. But we won't see a 2015 Subaru BRZ STI this year.

Lukekire wrote on July 1, 2014 - 1:36pm Permalink
When this car came out, it was meant to be the successor to the AE86 which is an excellent tuner car. So I see no problem with those people who want a turbo can't add one in themselves.
Carl wrote on July 2, 2014 - 1:12pm Permalink
Absolutely no reason whatsoever. We've a local tuner who has put a turbo on his BRZ and he's getting 300 hp at the wheels, so it's entirely possible.
Jason wrote on June 2, 2015 - 12:27pm Permalink
People want a turbo version from the manufacturer because it means you get to keep your warranty. When you buy a brand new car and mod it you are now on the hook if something goes wrong even if it has nothing to do with your mods. These companies love it when people mod there cars while under warranty because it saves them thousands of dollars in warranty work.
Aaron Turpen wrote on July 1, 2014 - 6:46pm Permalink
What Lukekire said. There are several aftermarket kits to tune and add turbos to this and the FR-S.
Shane wrote on March 19, 2015 - 4:47am Permalink
Dot even need to turbo(go with a supercharger if your looking into force induction), but I'm leaning towards the na side there's a reason Subaru still won't offer a forced induction option, they already have a performance cAr built on the philosophy of boost, I'm boaring and stroking mine to 2.3-2.5 liters, camshafts, pistons, rods, other internals, headers, and a quality cold air intake with an air of actually is worth the money on the brz...after all the engine work is done get it to the ground with lightweight parts such as a driveshaft, wheels and a flywheel. That's all going to be around 15k with a tune to make it all function in unity. my brz is going to cost 19k that's 34k for a SERIOUS track/sports car....who else agrees with my build advice