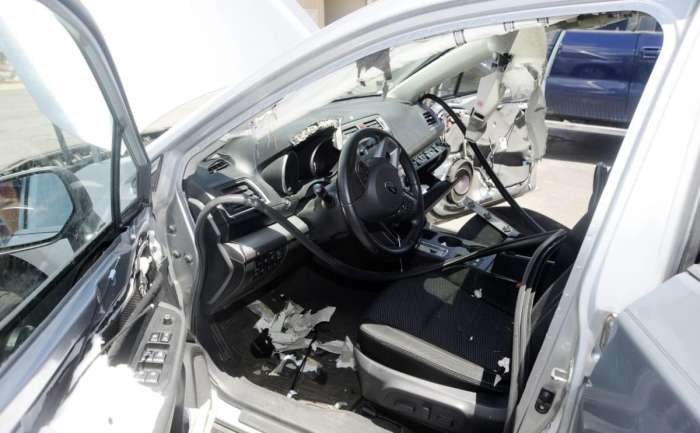 Why Do Bears Like to Destroy Subaru Outbacks in Colorado?

The bear destroyed the Outback with only 24,000 miles on it. The dash was completely torn out and one of the doors was found open. The damage is estimated at nearly $17,000 and the car will likely be scrapped according to Custom Color owner Dave Mihaich, who, over the years, has done work on cars that were damaged by bears. "It's the worst one we've ever seen,” Mihaich said. "It's not even drivable. It's a mess."

This time of year, bears are foraging for food after a long winter in hibernation. In this Subaru Outback case, there was no food in the vehicle, but there was a container of sugar-free mints. This bear was able to free himself from the small SUV/Crossover after getting inside.

Another bear got trapped in a Subaru Outback near Evergreen, Colorado recently looking for food, but got locked inside. Two deputies from the Jefferson County Sheriff’s Department responded and tried initially to free the medium-sized bear with a remote trunk opener. When that didn’t work, they opened the rear hatch by hand and freed the anxious bear while the other stood by with a shotgun. “Deputies finally got it out of there and warned all the campers of active bear activity,” Techmeyer said.

Carson wrote on August 3, 2018 - 5:47pm Permalink
Wow that was unusual. I just wrote an incredibly long comment but after I clicked submit my comment didn't show up. Grrrr... well I'm not writing all that over again. Anyway, just wanted to say superb blog!