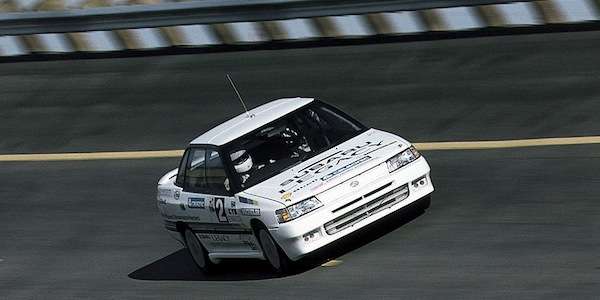 Why is the Subaru Legacy the longest lasting sedan on the road?

In January 1989, the first-generation Subaru Legacy took on the 100,000 km FIA World Land Endurance Record. What record did the Subaru set?
Advertisement

The new-generation 2015 Subaru Legacy is setting records and had the best December ever. The first generation Legacy sedan also set records and in January 1989, Legacy took on the 100,000 km FIA World Land Endurance Record outside of Phoenix, Arizona. What record did the Subaru set?

CHECK OUT: Why Subaru has the longest-lasting midsize sedan on the road

Legacy has a storied history

The first-generation Legacy was released in Japan in 1989 and the 2015 Legacy sedan has its roots in Rally racing. In 1993, Legacy participated in the World Rally Championship and finished in first place at the New Zealand Rally. Rally fans think of the Subaru WRX having Rally roots, but the Legacy was the original Subaru Rally car.

The new sixth generation 2015 Subaru Legacy sedan is still setting records and it started with the first-generation 1989 Legacy sedan.

Fan Poll: What was the most miles you’ve driven at one time stopping only for fuel/food/restroom?

ScoobySubiedoo wrote on January 18, 2015 - 8:15pm Permalink
Now that's what I call a LEGACY. Too bad so few customers know about this legacy of durability. If they did, sales would reflect this--families value dependability and reliability over every other factor, yet Legacy is not one of the best-selling family sedans. Subaru only sells about 5,000 per month, while Toyota sells about 40,000 Camry's, and Ford sells about 25,000 Fusions, per month. Subaru better get the word out. It'd be great to a Subaru commercial with a flashback to the Legacy setting that Land Endurance record. By the way, the Legacy is one of the top 5 longest-lasting mid-size sedans according to Polk.
Michal wrote on May 9, 2015 - 3:03pm Permalink
Drove Subaru Legacy 1992 2.0 L 116 HP for 3350km in one shot, stopping for food...etc had a coo-driver we were swapping wheel from time to time....it took us 39 hrs