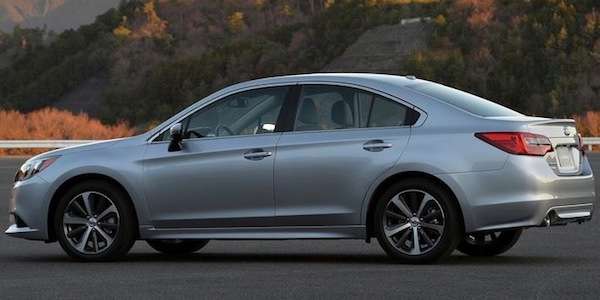 Why Subaru has the longest-lasting midsize sedan on the road

The all-new 2015 Subaru Legacy sedan is about to make its dealer debut. Why are its roots important?
Advertisement

With the 2015 Subaru Legacy sedan about to make its dealer launch here in the U.S, we can go back to its roots and learn what makes it a good car for sedan buyers. Subaru has been long criticized for their cheaper interiors and boxy styling, but they have been known to last longer than many brands.

Now I would question how many WRX and WRX STI’s are still on the road because of their extreme use and how many used parts are for sale on the internet. But one thing you notice about Subaru owners, is how long they hold on to their cars. Many consider them a member of the family and wouldn’t dare get rid of them. These devoted owners hold on to the cars and pass them on to family members.

The first-generation Legacy was released in Japan in 1989 and the 2015 Legacy sedan has its roots in Rally racing. In 1989 the new Legacy established a new 100,000 km world speed record with an average speed of of 223.345 km/h. In 1993, Legacy participated in the World Rally Championship and finished in first place at the New Zealand Rally. We think of the WRX STI having Rally roots, but the Legacy was the original Subaru Rally car.

Consumer Reports also did a study and found that the Subaru Legacy made the list of cars most likely to go over the 200,000 mile mark. They compiled the list from listings for 30 million vehicles advertised for sale during the year and looked at model years 1981-2010. Legacy was at the top of the list. The Outback wagon was another Subaru vehicle that made the list.

Subaru has a long list of customer testimonials and here is one from Marvin W from Belding, MI. “I bought this Legacy with 110,000 miles on it. I only changed the oil, tires, exhaust, and brakes. Never had problems with it and I’m still driving it. My co-workers always asked me, “How many miles now?” When I got close to 300,000 miles, they were curious if I would make it. So, I made this special photo and sent it to them. Well now I have 302,000 miles, and it’s still going strong. Just got new tires today, so I guess I’m keeping it a bit longer.”

The all-new 2015 Subaru Legacy has good roots in Rally racing and a long history of sedans and wagons that have served their owners well. It’s a good reason why Subaru has the longest-lasting midsize sedan on the road today.

Other 2015 Subaru Legacy stories of interest.
Why these two Subarus are the most likely to go 200,000 miles

GREGORY HENRY wrote on May 26, 2014 - 2:46pm Permalink
I have been tracking thee Suburu Forester for all these years and always loved the techno behind the allwheel drive system. test driven a few models, but never had the cash to buy one. My heart still have the desire to own one soon. Kind Regards, Gregory Henry
JJ Haller wrote on January 18, 2015 - 11:34am Permalink
2000 Forester 230Kmi. Not without issues: 2 head gaskets, 2 radiators, 8 rear wheel bearings, 2 cats. Normal: new clutch (replacement 10x the OE), 4 sets brakes, timing belts & water pumps, 3 anti knock sensors, O2 sensors, exhaust system, plugs and wires, etc. Rear wheel bearings happened before 80K. this is my third Subaru and my last. What they get right is very good, and what they get wrong is just bad design and costly to owner!
Larry wrote on September 3, 2015 - 1:48pm Permalink
My Girlfriend's Subaru did not outlast my 86 Hyundai excel in terms of mileage. Died at 140,000 with a seized camshaft that stripped the timing belt. She did spend much on engine repair. My Excel lasted 170,000. Head gaskets seem to go quite a bit (Is this a 2.5L thing?) at $1800 to fix. After skiing for 30 years, driving through many, many snowstorms, never getting stuck, I don't see the need for AWD. Snow tires? YES. Because they help you STOP quicker on snow/ice. AWD without snows is worse than 2WD with snows.
Talon wrote on April 13, 2018 - 10:28am Permalink
So, many Subarus are still on the road because their owners keep repairing them, not because they are so dependable. I have looked up Subaru's dependability on Consumer Reports and many models have been more dependable than average since about 2013-2014, but that may be just because those are newer models and haven't had the problems of older models yet (as I write this in April, 2018). My sister drives only Subarus and for her, it is about broadcasting her lifestyle. She knows she will spend a lot repairing them, but this is who she is.
NormT wrote on August 5, 2018 - 9:50pm Permalink
Truedelta is showing similar high repair rate on older models. And with the 2.0/2.5 oil consumption issues like our 2012 Forester had, not to mention cracked windshield and P300 DTC with coolant level lowering, I'm not surprised they have a low rating.
Talon wrote on June 7, 2019 - 10:16am Permalink
The fact that there are many Subarus still on the road is more due to their owner's behavior than Subarus being dependable cars. Subaru owners simply keep their cars a long time and just get them repaired. According to Consumer Reports Subaru vehicles were below average in dependability up until 2014 (excluding WRX).