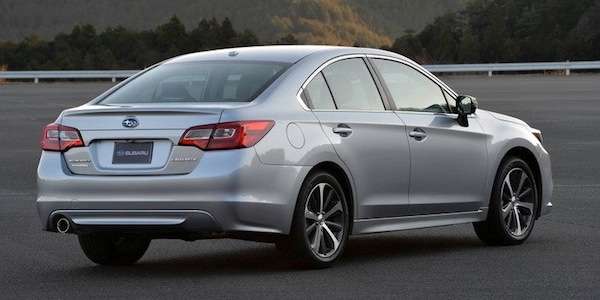 Why these two Subarus are the most likely to go 200,000 miles

2015 Subaru Legacy sedan and 2014 Subaru Outback wagon are in the top ten cars most likely to go 200,000 miles. What sets them apart from the competition?
Advertisement

Consumer Reports has compiled a list of the top ten cars most likely to go 200,000 miles. It's not a surprise that two Subarus made the top ten list. The 2015 Subaru Legacy sedan and 2014 Subaru Outback wagon. Subarus are known to go this many miles and more, and one thing you’ll notice about their owners, is how long they hang on to them. Like a badge of honor, they watch the odometer to see it roll over the 100,000 mile and then 200,000 mile marks and beyond.

Many Subaru owners consider their car a member of the family and wouldn’t dare get rid of them. With such devoted owners, according to Subaru, 96 percent of all Subaru cars built in the last 12 years are still on the road today. That’s an amazing number when you consider how many older Subarus are still going strong.

Consumer Reports says that iSeeCars.com, the data aggregator, compiled a study based on listings for 30 million vehicles advertised for sale during the last year. Looking at the model years 1981 to 2010, the company ranked those vehicles based on the percentage that achieved the impressive 200,000-mile mark.

Interestingly, the iSeeCars list is made up almost entirely of mainstream sedans, with the only exceptions being the Honda Odyssey minivan and Subaru Outback wagon. They were all family vehicles purchased for everyday use. Notably, all the cars are Japanese models except the Ford Taurus, and no European brands made the list.

Who made the top ten list? Honda Accord, Subaru Legacy, Toyota Avalon, Honda Odyssey, Nissan Maxima, Toyota Camry, Ford Taurus, Honda Civic, Acura TL and Subaru Outback. Toyota and Honda have long been known for their excellent dependability and longevity, but since this is a story about Subaru, we’ll focus on why they have two vehicles on the list, and what sets the brand apart from the competition.

What are the advantages of the boxer design vs inline and V-type engines? The Boxer provides a smooth ride and long lasting dependability. The Subaru Boxer engines' unique design provides less vibration than the competitors design. Each horizontally opposed piston cancels the vibration of the opposite piston. This makes a difference over hundreds of thousands of miles. The pistons in the Boxer engine always stay lubricated which reduces wear and friction compared to “dry starting” Inline and V-type engines. Think of it like a roll-on deodorant where you have to get the ball wet by rolling it before it works. The Subaru Boxer stays lubricated and there is less friction when initially starting the vehicle.

Subaru owners are some of the most loyal automobile owners in the world because they know their car is dependable and they can count on their multi-use vehicle to take them anywhere they want to go. It’s not a surprise that the 2015 Subaru Legacy sedan and 2014 Subaru Outback wagon are in the top ten cars most likely to go 200,000 miles.

Other Subaru Legacy and Outback stories of interest.