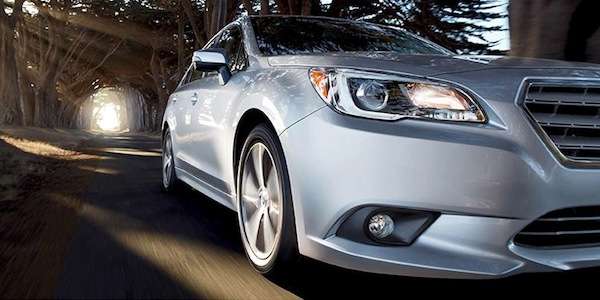 The all-new 2015 Subaru Legacy excels in one key area where the other leading mid-size sedans don’t even offer it.
Advertisement

The new 2015 Subaru Legacy sedan has been unveiled at the Chicago Auto Show and the new mid-size sedan excels in one key area where other top sedans don’t. Legacy has a long tradition of being a safe car but it excels in its all-wheel-drive capabilities where the the other top sedans in this class don’t offer this key feature. It’s Subaru’s Symmetrical All-Wheel Drive and it’s a key feature many drivers wish they had this winter.

As I was was watching images of cars stuck on snowy highways all over the southern United States recently, I was thinking how they would have benefitted from having a sedan with all-wheel-drive. Cars were stranded for hours and sometimes days because they couldn’t navigate the unusual snowfall. But if they would have had the proper equipment, it would have been a much different story.

None of the other top sedans in this segment like the Honda Accord LX, Ford Fusion SE, VW Passat SE, Hyundai Sonata SE or Mazda6 Touring offers all-wheel drive. But the 2015 Legacy 2.5i Premium base model does. This is where Subaru and the new 2015 Legacy sedan excels. It’s always had the Subaru all-wheel-drive system, but it gets refined for the new six-generation Legacy.

As the driver accelerates through slick turns and curves, traction is optimized by the steering angle and yaw rate sensors using the Active Torque Split AWD system. It optimizes traction and steering response when accelerating, particularly when the road surface is covered in ice or snow. This is where the Subaru Legacy can go places the other top sedans in this segment can’t.

And not only does the new Legacy feature Subaru’s Symmetrical All-Wheel Drive, but it can accomplish this and still get 36 mpg when equipped with the 2.4-liter four cylinder powerplant. This beats all the other top sedans listed above expect for the two-wheel-drive 2014 Mazda6 Touring that gets 38 mpg highway. Subaru has accomplished this with their new Lineartronic CVT automatic that has been newly refined for higher efficiency.

The all-new 2015 Subaru Legacy is in its six generation and is celebrating its 25th anniversary this year. A video below shows the 1st generation Legacy passing the "Baton" to the 2nd generation, then on to the 3rd, finally all the way through to the 6th all-new Legacy. It’s a brilliantly composed clip touching on both the history of the Legacy as well as the continual improvements being made as the flagship model of the Subaru brand.

Watch the video below fusing 25 years of the Legacy.