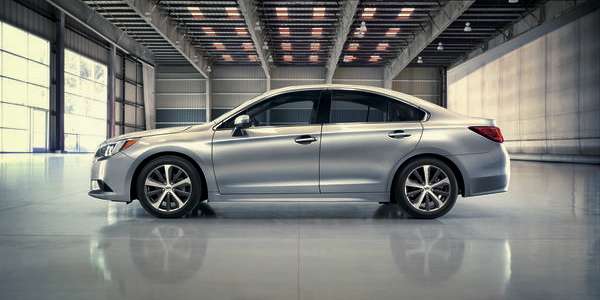 The all-new 2015 Subaru Legacy has been unveiled at Chicago Auto Show 2014. What’s new on the new 25th anniversary sedan?
Advertisement

We reveled new images of the all-new 2015 Subaru Legacy yesterday with it’s new exterior styling, but there’s a lot more to the sedan inside and underneath. This week, we’ll break down its new interior refinement, safety technology and higher fuel efficiency along with the largest interior passenger volume in the midsize sedan segment. What’s new on the exterior of the 2015 Legacy?

Today we’ll focus on the 2015 Legacy’s new design language. While many were hoping the new-generation Legacy would look more like the Legacy Concept revealed at the 2013 Los Angeles Auto Show, that rarely happens. The 2015 Legacy “echoes” design themes introduced by the Legacy Concept and gets sleeker and sportier than the outgoing 2014 model. What is different?

2015 Legacy gets a sleeker coupe-like profile and features what Subaru calls a “nosecone” front section that combines the grille and bumper into one smooth piece. It also features a new aluminum hood for the first time. What’s significant about the new hood, is aluminum will reduce weight over the front wheels, enhancing steering response. This will work in concert with a new quick-ratio electric power-assisted steering that delivers a new feel and also contributes to reduced fuel consumption.

The 2015 Legacy will deliver this while still maintaining a footprint similar to the outgoing model. Legacy gets a new acoustic windshield that is more raked, and pulled forward 2.0 in. at the base. The new windshield angle, higher seating hip points, new front partition windows and door-mounted side view mirrors will help improve visibility.

The new-generation Legacy gets sleeker and slippier through the air. A 10-percent improvement in aerodynamic efficiency contributes to lower fuel consumption. All 2015 Legacy 2.5i trim levels will debut with a standard Active Grille Shutter system, which helps to improve fuel economy by reducing wind resistance when closed.

Legacy 3.6R Limited will come with new standard HID low-beam headlights that give the car a more distinctive nighttime signature similar to some European model sedans. All Legacy models will feature U-shape tail and brake lights and will use LED bulbs for lower power consumption and a more luxurious appearance. Limited trim line models feature turn signal exterior mirrors, which are available as an option on Premium models.

Legacy gets sleeker and sportier than the outgoing 2014 model. The new 2015 Subaru Legacy arrives in U.S. showrooms in summer 2014 with the 4-cylinder 2.5i model available in Standard, Premium and Limited trim lines, accompanied by the top-of-line 6-cylinder 3.6R Limited. Pricing will be announced closer to the launch. Stay tuned to Toque News for the latest 2015 Subaru Legacy news. Come back tomorrow and we’ll see what two significant fixtures Subaru dropped on 2015 Legacy to get 36 mpg.