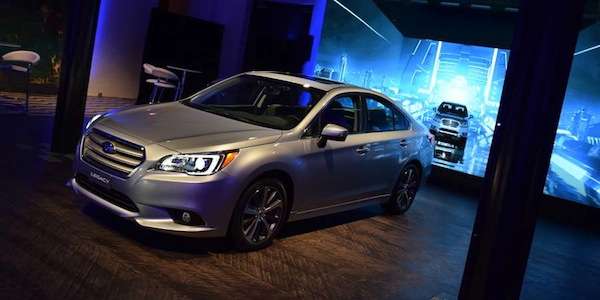 The all-new 2015 Subaru Legacy drops the manual and five-speed automatic and gets a new CVT transmission and now gets 36 mpg.
Advertisement

Two very important mechanical fixtures are going away forever on the new 2015 Legacy and they are never coming back. Most people won’t mind that the manual transmission is no longer available on the new 2015 Legacy. The five-speed automatic transmission is also gone forever on the new-generation Legacy. Subaru has always offered a six-speed manual on the Legacy, but why did they drop it and the five-speed automatic for the new-generation model?

Subaru doesn’t need to offer the manual or the five-speed automatic because they have improved their new Continuously Variable Transmission (CVT) called Lineartronic, so Legacy now gets 36 mpg highway with their four cylinder Boxer. Subaru engineers retuned the Lineartronic on the new Legacy and even with its Symmetrical all-wheel-drive, the new base sedan gets better mpg than some two-wheel-drive vehicles.

For 2015, the Legacy will still come with two engine choices, the 2.5-liter four-cylinder Boxer engine that produces 175 hp and 174 lb. ft of torque will come standard. The 2.5-liter receives numerous enhancements for lighter weight, improved efficiency, quieter operation and gets a 2 hp bump from the 2014 model. Peak torque remains at 174 lb.-ft. but is spread over a broader engine speed range for more responsive performance. Legacy will also come with the same 3.6-liter six-cylinder Boxer producing 256 hp and 247 lb. ft of torque on the 3.6R Limited model.

Subaru drops the fully synchronized six-speed standard gearbox and the five-speed adaptive electronic automatic in favor of the new CVT on the 2015 Legacy. It was all done so the new Legacy could get improved mileage over the outgoing model. The 2.5-liter four cylinder sees mileage estimates of 26 mpg city / 36 mpg highway / 30 mpg combined. The 6-cylinder 3.6R Limited model also sees fuel economy improve by 10 percent or more, with new estimated ratings of 20 mpg city / 28 mpg highway / 23 combined.

For 2015, all Legacy models will only be available with a Lineartronic CVT automatic. Subaru engineers were able to reduce friction in the CVT that contributes to higher fuel efficiency in the 2015 Legacy. Both models will feature the CVT that includes a six-speed manual mode and steering wheel paddle shifters. But the new 3.6R will get a new CVT using a high-torque version that helped the 3.6-liter six-cylinder get a 10 percent increase in fuel mileage. Both engines will run on regular 87 octane unleaded fuel. All models are equipped with Incline Start Assist and the electronic Hill Holder System that holds the vehicle in place until the driver applies the throttle.

This writer isn’t fond of the CVT but I recently drove the new 2014 Subaru XV Crosstrek Hybrid with the Lineartronic and was impressed. We took the Subaru Lineartronic CVT in the XV Hybrid up I-70 into the mountains west of Denver and pushed it hard. The shifts were smooth and there were only minor discernable steps or shifts between the highest and lowest available ratios. Subaru has made impressive improvements in the CVT for sure. The 2015 Legacy features the same new Lineartronic CVT and buyers will be happy with it.

The all-new 2015 Subaru Legacy sedan loses the six-speed manual gear box and five speed automatic, but gains a new CVT in favor of impressive fuel mileage for an all-wheel-drive sedan. Most buyers won’t miss the manual and the CVT automatic is a significant upgrade.