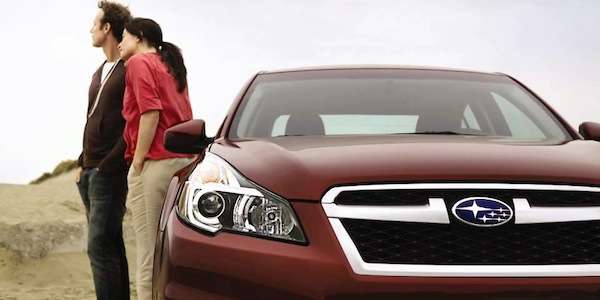 2015 Subaru Outback will debut in NY with improved fuel mileage

The all-new 2015 Subaru Outback will debut at the New York International Auto Show 2014. It should come with improved mileage.
Advertisement

According to a report by Car and Driver, the next-generation 2015 Subaru Outback will make its world premiere at the New York International Auto Show 2014 in April. We would have guessed the new-generation 2015 Outback would make its world debut in New York. Subaru is introducing all their new 2015 models at U.S. shows starting with the WRX in LA, WRX STI in Detroit, and Legacy in Chicago. The new 2015 Outback will be on stage in New York for its global debut.

Look for the next-generation Outback to come with new exterior styling to rival that of the Legacy sedan with its “hawkeye” headlights and a new sculptured front end. Don’t be surprised if the Outback wagon grows bigger and features more interior room like the 2015 Legacy sedan. Look for a new upscale interior with upgraded soft touch materials.

The newest Subaru wagon will also be getting the newly-tuned Lineartronic CVT automatic transmission. If it’s like the 2015 Legacy, Subaru will likely drop the six-speed manual gearbox and five-speed adaptive electronic automatic transmission in favor of the new CVT. This will improve the current 30/24 highway/city fuel mileage considerably. Look for the new Outback to also get 36 mpg highway with the 2.5i model.

Both the 2.5-liter Boxer four-cylinder and the 3.6-liter six-cylinder will continue on the new Outback multi-use vehicle. Both will be mated to the Lineartronic CVT for improved fuel-mileage. Subaru bumped up the 2.5-liter four 2 hp and Outback should see the same increase. The wagon will still come in base 2.5i, Premium and Limited trim models.

All 2015 Outback trim levels will be equipped with a newly refined version of the Active Torque Split version of Symmetrical AWD. An electronically managed continuously variable transfer clutch actively controls torque distribution in response to driving conditions and wheel slippage. The system can send additional torque to the rear wheels either pro-actively or in response to slippage at the front wheels. Outback will continue to be an ideal multi-use vehicle for recreational use for those with adventurous spirits.

Look for the new-generation 2015 Subaru Outback to be in dealer showrooms starting this summer. Stay tuned to Torque News as the new Outback is unveiled at NYIAS.