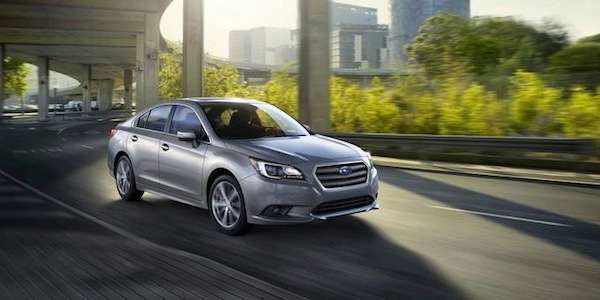 Subaru is the safety leader in the auto industry and the all-new 2015 Subaru Legacy will be the safest sedan they have built yet. Subaru has been receiving accolades for years now and is the only automaker in the world with the distinction of earning IIHS Top Safety Pick awards for every model it builds and has done so four consecutive years. But Subaru isn’t sitting on past success with the new-generation Legacy that launches later this year. It comes with more standard and optional safety features than ever before.

2015 Legacy comes standard with a number of new features to keep its driver and occupants safer. Legacy features a rear-view camera, now located closer to the center of the car for more natural imaging. It will also comes with a new rollover sensor that can deploy the side curtain airbags if an imminent rollover is detected. For 2015, Legacy introduces a new type of airbag restraint and a new available rear radar system. The new front seat-cushion airbags help to keep occupants in place in a frontal collision.

How do all these new standard safety features work on the new six-generation Legacy? The new rear radar system is standard on the 2015 Legacy 2.5i Limited and 3.6R Limited and available for the 2.5i Premium. This system introduces Subaru’s next step toward “full-perimeter” preventive safety. The new rear radar system offers three functions. It comes with Blind Spot Detection, Lane Change Assist and Rear Cross Traffic Alert.

Subaru says, Blind Spot Detection detects vehicles behind the C-pillars and in other blind spots; Lane Change Assist detects approaching vehicles when changing lanes, and Rear Cross Traffic Alert detects close vehicles while reversing, such as out of a parking space or driveway. LED indicators on the side mirrors alert the driver. Rear Cross Traffic Alert uses an indicator in the rear view camera display.

Subaru continues to build the safest cars on the planet and the all-new 2015 Legacy is the latest example of their commitment to building safe automobiles.

Watch 2015 Subaru Legacy presents “Sweet Home” as it was introduced at the Chicago Auto Show video.