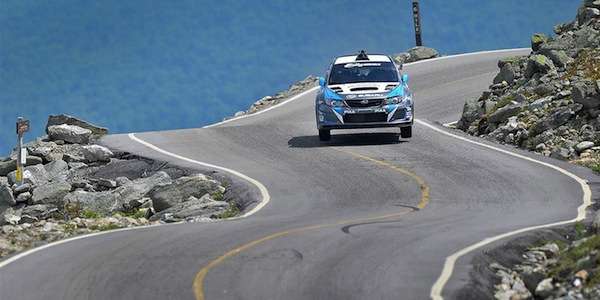 Higgins broke the course record at Mt. Washington Hillclimb in the Subaru WRX STI. Does he have nerves of steel?
Advertisement

The Subaru WRX STI is rally-bred and can handle extreme conditions on the rally course. But David Higgins driving the WRX STI Rally car for the Subaru Rally team must have nerves of steel. Higgins broke his own course record set in 2011 at this same rally event in impressive fashion. The video below shows David Higgins and Craig Drew setting the Mt. Washington Hillclimb record in the Subaru WRX STI. But how they did it is nothing short of amazing.

What’s so amazing is watching Higgins push the Subaru WRX STI up the mountain and then they get above the tree line. Up on the mountain there are no guard rails to keep the STI on the road if something happens. Higgins is pushing the WRX STI as hard as he can and comes within inches of the edge of the road while going at incredible speeds. The video below is a bit unnerving to watch.

Higgins smashed his own record

Higgins broke his own course record by over two seconds. Higgins driving the Vermont SportsCar-prepared 2014 Subaru WRX STI Rally car thought he would not be able to break his own record, because this year the car was much different. But he was able to set a blistering new record time of 6 minutes and 9.09 seconds in spite of the more restrictive rules of the Rally America Open Class.

Higgins thought record was out of reach

“After our splits on the lower half practice runs were a bit slower than the record pace I was definitely thinking the record was out of reach,” explained Higgins. “We had more weight and less power this time but our Subaru really excelled on the top-half of the course which has the dirt section and some very technical parts. Our speed there is what helped us surpass the record.”

This years restrictions make it even more amazing

This years Rally America Open Class rules were much more restrictive than when Higgins set a course record in 2011. The 2014 Subaru WRX STI Higgins piloted this year was equipped with almost 100 less horsepower and was 500 lbs. heavier than his 2011 record-breaking car. In 2011 he ran without having the weight of a co-driver, but he also needed to drive the road from memory. With the addition of Drew as co-driver this year, enabled Higgins to go “flat-out with confidence.”

It takes two to set the record

After the race, Higgins gave credit to his co-driver and the Subaru WRX STI. “It was a great event and we put in a big effort for those few seconds,” explained Higgins. “There is so much history here and it’s great to be a part of it again for Subaru. This was a big challenge this weekend as we had Pastrana and our old record staring us down. But Craig (Drew) was perfect on the notes and Subaru gave me a car that was perfect.”

Watch David Higgins and Craig Drew set the Mt. Washington Hillclimb record in the Subaru WRX STI. The video below shows the incredible nerves of steel Higgins has in order to pull it off.