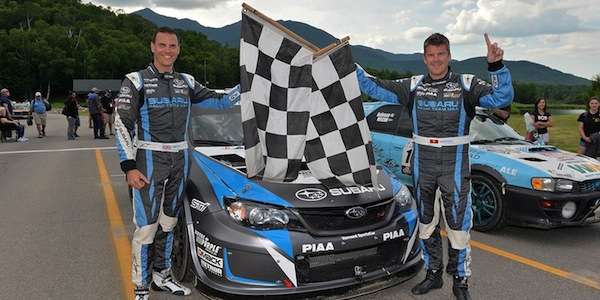 Higgins smashes his own record

David Higgins was “King of the Hill” at the Mt. Washington Hillclimb, breaking his own course record by over two seconds. Higgins driving the Vermont SportsCar-prepared 2014 Subaru WRX STI Rally car thought he would not be able to break his own record, because this year the car was much different. But he was able to set a blistering new record time of 6 minutes and 9.09 seconds in spite of the more restrictive rules of the Rally America Open Class.

Higgins thought record was out of reach

“After our splits on the lower half practice runs were a bit slower than the record pace I was definitely thinking the record was out of reach,” explained Higgins. “We had more weight and less power this time but our Subaru really excelled on the top-half of the course which has the dirt section and some very technical parts. Our speed there is what helped us surpass the record.”

This years Rally America Open Class rules were much more restrictive than when Higgins set a course record in 2011. The 2014 Subaru WRX STI Higgins piloted this year was equipped with almost 100 less horsepower and was 500 lbs. heavier than his 2011 record-breaking car. In 2011 he ran without having the weight of a co-driver, but he also needed to drive the road from memory. With the addition of Drew as co-driver this year, enabled Higgins to go “flat-out with confidence.”

After the race, Higgins gave credit to his co-driver and the Subaru WRX STI. “It was a great event and we put in a big effort for those few seconds,” explained Higgins. “There is so much history here and it’s great to be a part of it again for Subaru. This was a big challenge this weekend as we had Pastrana and our old record staring us down. But Craig (Drew) was perfect on the notes and Subaru gave me a car that was perfect.”

Pastrana not far off the pace

Pastrana, driving an identically prepared Subaru WRX STI Rally car, had a few setbacks during the race but was able to regain his form. On his second top-half run he clipped a rock on a tight corner puncturing his tire, and on Sunday, his first full-course run was slowed by a loss of boost pressure in the STI. Pastrana recovered from all that and finished seconds off of Higgins record pace, eventually finishing with a time of 6 minutes and 12.29 seconds.

Higgins and Drew continue to be a great team and get their fourth victory in the 2014 Subaru WRX STI Rally car this season. This Mt. Washington Hillclimb win extends their lead in the 2014 Rally America Championship where Higgins is aiming for his 4th consecutive Driver’s Title.