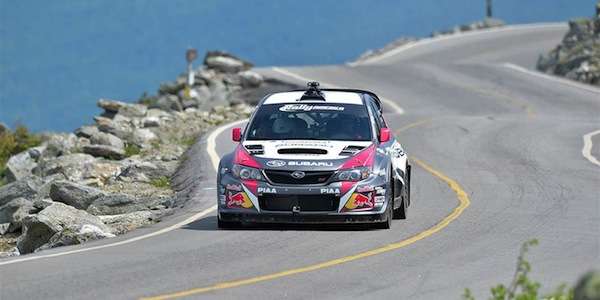 This is day three at the Mt. Washington Hillclimb and records could be set by the 2014 Subaru WRX STI.
Advertisement

Day one saw David Higgins leading his teammate Travis Pastrana by 9.9 seconds after the first two stages of the Rally at the Subaru Mt. Washington Hillclimb. Both 2014 Subaru WRX STIs were fast and doing well. This is one of the oldest motorsports events in the U.S. and is round five of the 2014 Rally America National Championship.

Higgins and co-driver Craig Drew went fastest overall among rally teams on both bottom-half course runs on Friday. On the first stage Higgins and Drew were faster than Pastrana and co-driver Chrissie Beavis by just 4.6 seconds. On the second run, they extended their lead by going 5.3 seconds faster than Pastrana to hold an overnight lead going into Saturday of just under ten seconds.

Higgins may break his own record

David Higgins holds the overall course record at the Mt. Washington Hillclimb of six minutes and 11.54 seconds set in 2011. But back when he set the record, he was driving a less restrictive Subaru WRX STI. This year, Higgins is entered in the Rally America Open class which is much more restrictive.

In the Open class, Higgins is required to run a smaller turbo restrictor (34mm vs 40mm), a higher minimum weight and is required to run a co-driver in the Rally America class. This year, Higgins’ 2014 Subaru WRX STI is nearly 500 lbs. heavier and 100 hp less powerful than his record setting Subaru from 2011.

But after analyzing their times on the bottom half runs Friday morning, Higgins thinks breaking the record may well be possible on the full course runs today (Sunday). On the first run Saturday, Pastrana with co-driver Chrissie Beavis went fastest overall, squeaking out a stage win over teammate David Higgins and co-driver Craig Drew by just a tenth of a second.

But the lead was short-lived when Pastrana clipped a rock on the inside of a turn and punctured his tire with just over one mile into the 3.2 mile stage. Pastrana drove the rest of the course with a destroyed tire which tore off his fender and damaged his front bumper. Pastrana lost 27 seconds to David Higgins, who went on to win the stage.

Higgins in the lead

Higgins leads the Rally portion of the event over Pastrana by 37.4 seconds going into todays stages. Pastrana is 2nd overall, and has a good lead of 1 minute and 24 seconds over the third overall Subaru privateer Dillon Van Way and co-driver Andrew Edwards.

Higgins wants to break the record