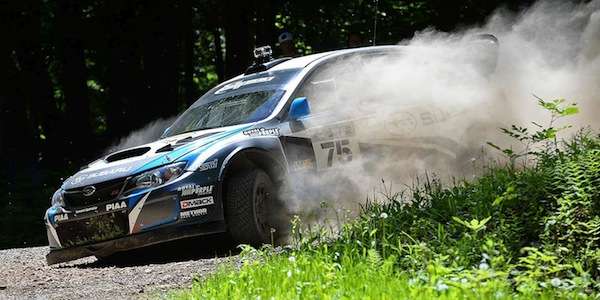 The new 2014 Subaru WRX STI Rally car driven by David Higgins and co-piloted by Craig Drew dominated the Susquehannock Trail Performance Rally (STPR) this weekend. This was the fourth round of the Rally America National Championship and the conditions were idea for a fast race in Wellsboro, Pennsylvania. This is one of the oldest rally races on the schedule and also one of the fastest, as the rally cars reach speeds of 100 mph as the drivers navigate the cars thorough densely wooded roads.

The Subaru WRX STI Rally team won for the third time this season as they widen their Rally America points standings lead. It was a dominating performance as Higgins and Drew won all twelve stages of the STPR. On day one, heavy dust in the air created a safety issue for the racers on the one-mile circuit at Tioga Country Fairgrounds, and event organizers decided the super special stages would not be counted in the scoring. The top four cars including the #75 Subaru WRX STI ran individually. Higgins and Drew ended the day in the overall lead.

During an interview with Rally America, David Higgins said it’s important to drive the Subaru WRX STI rally car hard and not good to hold back. He said, “It’s not easy to drive these cars slowly, these cars are designed to be driven on the limit. You generate the grip from the speed that you carry, if you don’t carry the speed you don’t generate the grip, so it’s important to charge hard.”

Day two saw Higgins drive the WRX STI flawlessly as they went on to win all the remaining stages. Their closest rivals were FY Racing’s Adam Yeoman and Jordan Schulze driving a 2007 Subaru WRX STI. They stayed close until Yeoman crashed into a tree on Stage 9. The drivers were reported to be unhurt.

Higgins and Drew pushed the WRX STI rally car hard through the extremely fast and smooth Pennsylvania roads for the remaining stages and went on to victory. The weather was beautiful for the race, but the road conditions were less than ideal. On Saturday, after pulling in at the first service stop, Higgins commented, “It’s actually quite slippery. The roads have dried up significantly and the thin layer of dust and sand is surprisingly slick.”

But David Higgins and Craig Drew have been in these conditions before and their expert skills were no match for the competition. With Higgins and Drew building a comfortable lead into the last stages of STPR, George Plsek and Paddy Robinson driving a 2006 Mitsubishi EVO IX stayed steady to take second place. Plsek credited his first national podium to “just driving his own race and not letting the possibility of finishing on the national podium to force him into any mistakes.”

The new 2014 Subaru WRX STI Rally car driven by David Higgins and co-piloted by Craig Drew dominated the Susquehannock Trail Performance Rally this weekend. The duo drove with “utmost precision” and ran a flawless event extending their 2014 Rally America Championship Points lead. Next up, the team will head to the Subaru Mt. Washington HillClimb June 27-29 in Gorham, New Hampshire. Can the team win their fourth straight Rally America Title?