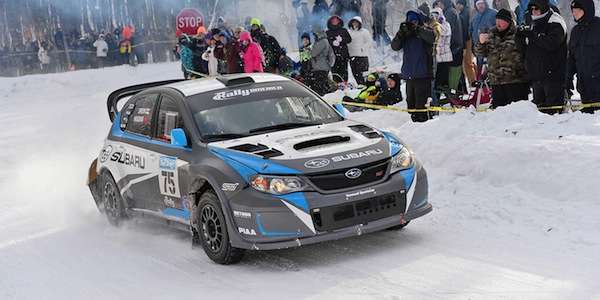 Subaru fans will get to see the new 2014 WRX STI Rally car in action. NBC Sports and Rally America have reached an agreement to bring eight episodes of the 2014 Rally America National Championship to NBC viewers.
Advertisement

Subaru fans who can’t attend the Rally America events will get to see the new 2014 WRX STI Rally car this year on NBC. If you are a Rally Racing fan this is good news from NBC Sports. They have inked an agreement to bring all eight 2014 Rally America National Championship events to NBC this year. Unfortunately they won’t be aired live, but each event will be produced into an hour-long show featuring the best of the event coverage, along with personal stories of national and regional competitors as they battle to overcome obstacles in their race to the podium. NBC says it will be “rally racing action as you've never seen it before.”

For those who aren’t familiar with Rally racing, it features modified production cars racing against the clock on closed-off sections of real roads that are usually unpaved, tree-lined, and unforgiving. These rally events last several days and cover hundreds of miles through rain, snow, and they even race at night.

The top drivers and their teams are professionals who are incredibly skilled and the cars are put to the extreme test. This extreme form of racing is what makes Rally Racing the world's premiere and most exciting motor sport, and one that is quickly growing in North America. If you haven’t seen it before, you will be hooked after the first episode.

The Rally America National Championship Series attracts top driving talent and extreme sports icons such as last year's Rally America Champion David Higgins along with Ken Block, and Antoine L'Estage. Starting in the second race, Travis Pastrana will return to the Subaru team. Pastrana brings a strong resume and following with him as he rejoins the already successful Subaru team. Travis, began his auto racing career driving a Subaru in 2004, and went on to win four straight Rally America titles with Subaru Rally Team USA between 2006 and 2010.

"I'm very excited about the return of Travis Pastrana to the Rally America National Championship," said Bill Fogg, President of Rally America, Inc. "I think Travis will add to the excitement that David, Ken and Antoine have been delivering to our fans.  We have talent coming out of the woodwork in all rally classes and I see more than just these four bringing top notch race excitement to our viewers during the 2014 season."

Last year, Subaru Rally Team USA’s Higgins and co-driver Craig Drew won a season-long battle against Ford and Ken Block, to win their third Rally America driver’s title in a row and the Manufacturer’s title for Subaru of America. David Higgins said, "This is great news for the Championship at just the right time, getting on NBC will not only get our sport out to those who can't make it to the events, but will also find new fans who may not have experienced one of the best forms of motorsports there is."

Get ready for great action on NBC Sports as the all-new 2014 Subaru WRX STI driven by David Higgins and co-driver Craig Drew defend their title.