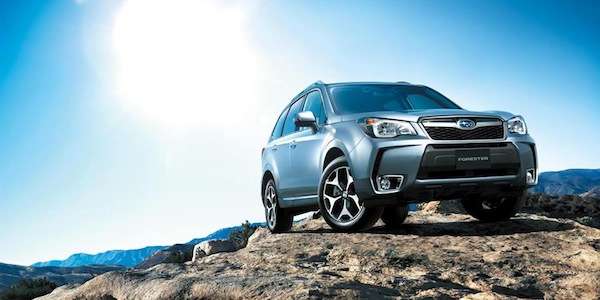 The 2015 Subaru Forester continues at the same price but gets two new standard technology features in Canada.
Advertisement

The 2015 Subaru Forester pricing in Canada has been announced and the price stays the same, but the SUV gets two new standard technology features. The 2015 Subaru Forester entry model 2.5i with manual transmission continues to be available at $25,995, but Subaru increases the value by adding a rear view camera and color multi-function display as standard features for 2015.

The 2015 Forester 2.5i Touring Package also gets upgraded with an optional Technology Package featuring EyeSight safety system and proximity key with a push-button ignition. Subaru’s Eyesight uses a stereo camera technology that integrates Adaptive Cruise Control, Pre-Collision Braking and a Vehicle Lane Departure Warning and is the highest-rated front crash prevention system by the Insurance Institute for Highway Safety (IIHS).

Forester has received many awards and is the number one selling vehicle in Subaru’s lineup in the U.S. and Canada. Forester won the Sport/Utility of the Year award from Motor Trend, named Best SUV in the Yahoo Autos Car of the Year awards and took home the Best Bet award in the Small SUV category in Consumer Reports Best Bet list.

The 2015 Subaru Forester continues at the same price in Canada but gets two new standard technology features for the entry model 2.5i with manual transmission. Forester should continue to see strong sales in Canada with the pricing and added value for the 2015 model year.

Other 2015 Subaru Forester stories of interest.