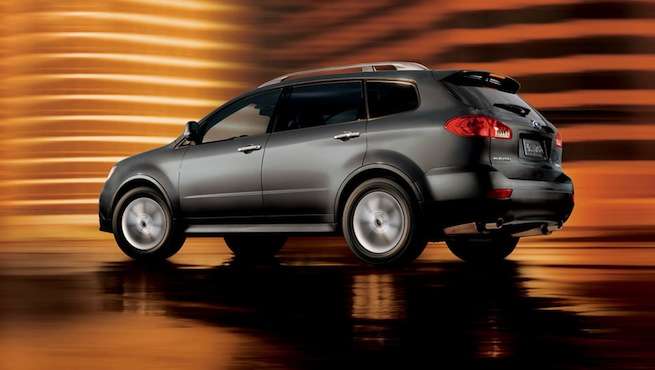 Three reasons why Subaru needs to replace the 2014 Tribeca

Subaru just released information on the new 2014 Tribeca but the brand needs to either update or replace the slow-selling seven-passenger SUV.
Advertisement

Subaru has pushed all the right buttons and made all the right moves with their lineup, why haven’t buyers responded well to the 7-passenger Tribeca? Sales are booming at Subaru, and it seems like the new 2014 Tribeca would appeal to buyers around the globe, but sales have been sluggish at best. The new Forester SUV, XV Crosstrek and BRZ sport coupe are flying out of Subaru showrooms. What is Subaru going to do with their problem child Tribeca?

There’s nothing wrong with the Tribeca, but there isn’t anything that makes it stand out either. The competition in the seven-passenger crossover-SUV segment is very strong. Subaru has done well with their niche market all-wheel-drive vehicles and the brand is growing quickly and attracting new buyers. But they can’t compete in this segment with the Hyundai Santa Fe, Kia Sorento, Nissan Pathfinder, Mitsubishi Outlander, Toyota Highlander and Honda Pilot.

Subaru needs to update the Tribeca or replace it all altogether with a new model. The Tribeca has cramped third-row seating, limited cargo capacity and has an aging design. Subaru recognizes this and there is good news. According to Automotive News, Subaru is working on an all-new seven-seat SUV crossover to replace the Tribeca. It’s been reported that it will arrive within three years.

In the meantime, here is the latest on the 2014 Subaru Tribeca that starts at $38,995 Canadian. Subaru Canada has released information on the 2014 model and it still comes with what makes it good. It offers Subaru’s 3.6-liter six-cylinder Boxer engine that produces 256 horsepower and 247 lb-ft of torque. It comes with the excellent all-weather multi-terrain handling of Subaru's symmetrical full-time All-Wheel Drive.

If you are thinking about buying a new 2014 Subaru Tribeca, you may want to wait. It looks like Subaru will do away with the aging Tribeca but still remain in the competitive mid-size SUV segment with an all-new model. Look for a seven-seat Subaru SUV/crossover to be completely new and arrive in global showrooms within the next three years.

Come back tomorrow as Torque News brings you all the latest Subaru news.